What to make of time? Can you be inspired by it? How do you harness it? We speak to painter Jake Wood Evans to find out how time influences his distorted, ethereal, ambiguous portraits. 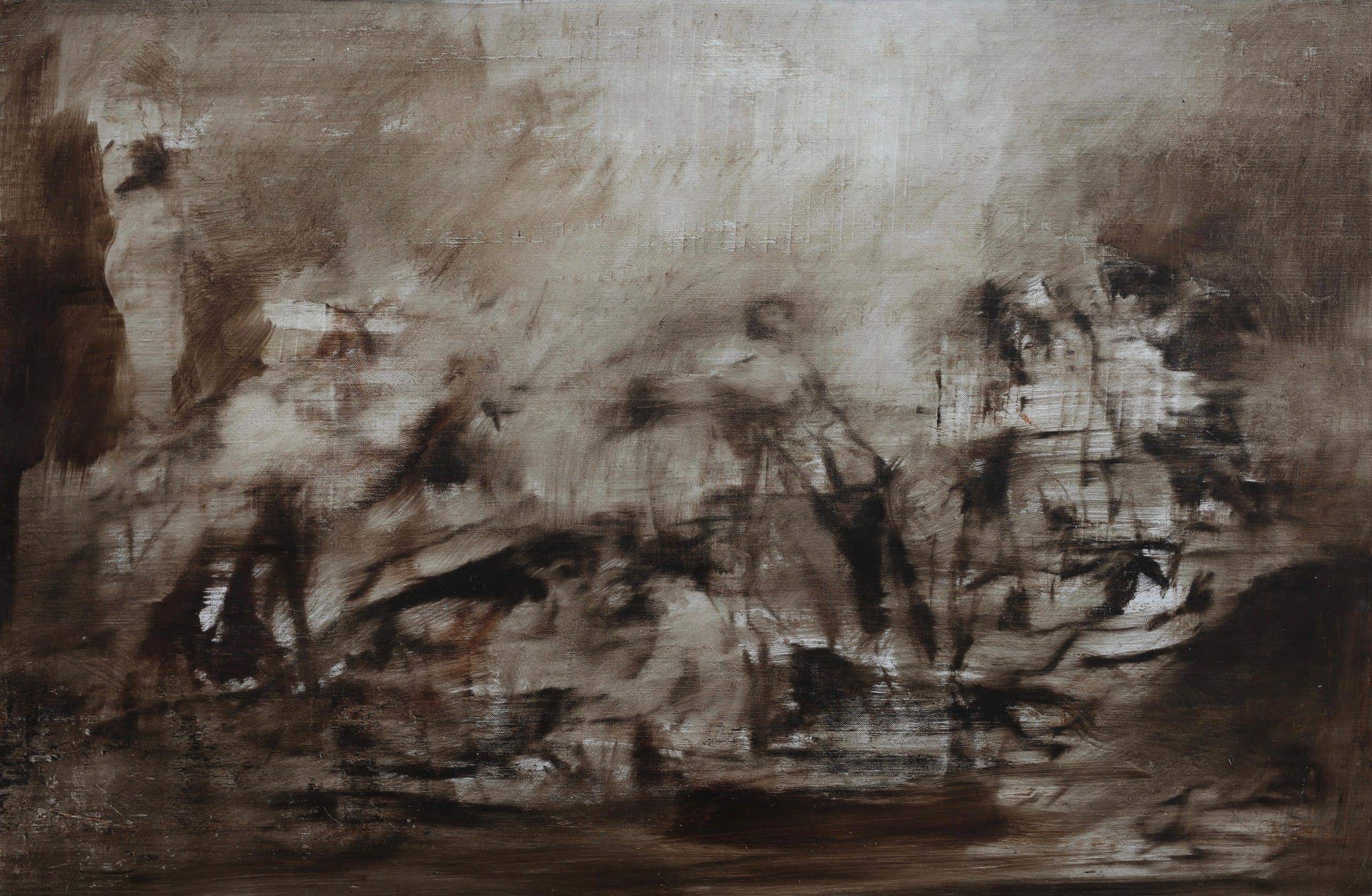 Time moves differently at the moment. It speeds up, it slows down. Covid dependent, government imposed. Days turn into weeks into months. Lockdown made us aware of individual seconds. Time is the hinge around which Jake Wood Evans’ work pivots. It is in the subject matter, in the distortion, in the brushstrokes.

He paints regency figures, recognisable yet unidentifiable due to the way they seem to fade into the background. The paint renders them ghost-like, faceless, empty reminders of someone’s past. Taking cues from artists such as Gainsborough and Poussin, fused with a Bacon-esque eye for disfiguration, Jake’s art evades clear classification. 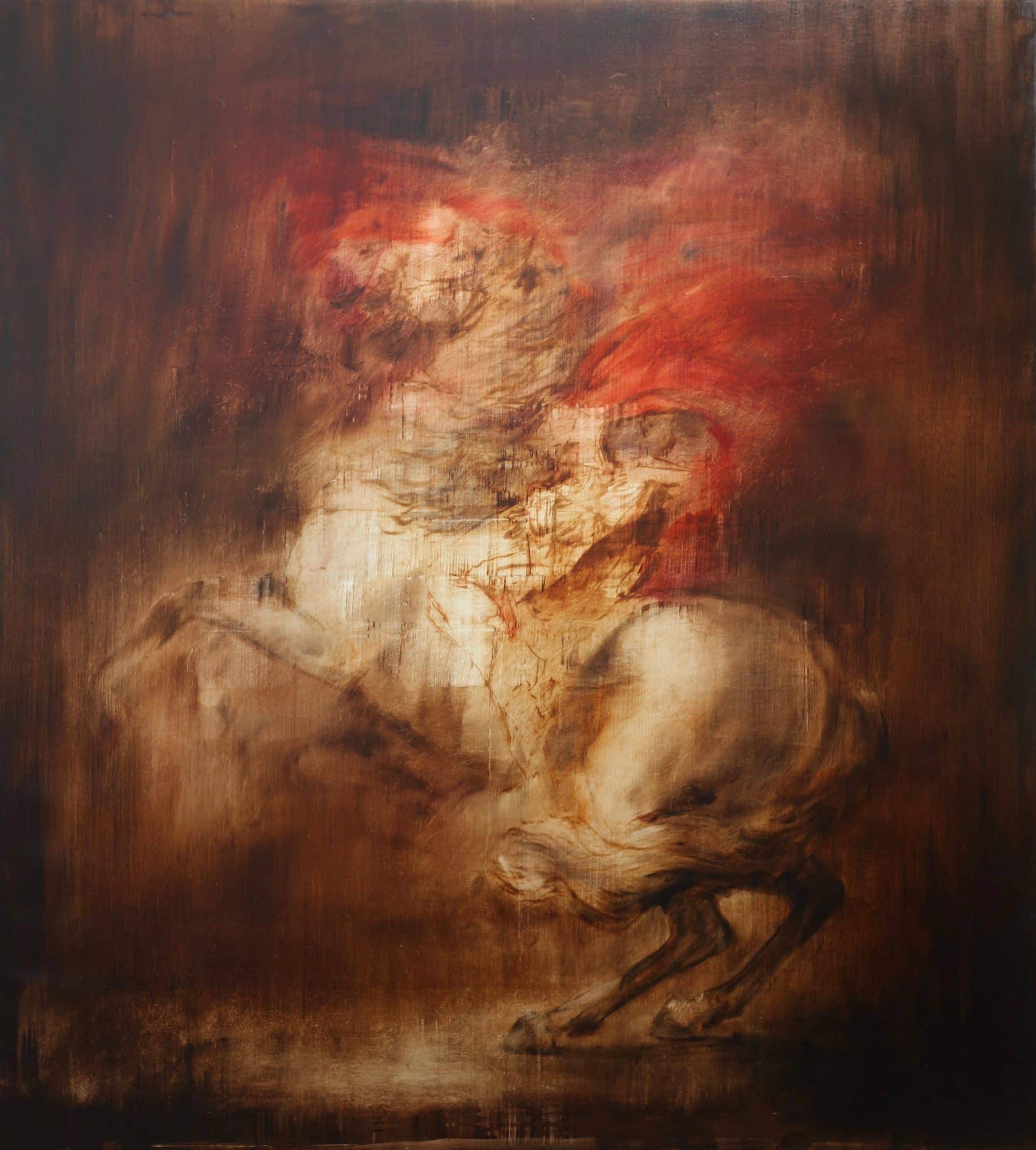 On the link between his work and time, Jake says “I think using references from the past naturally brings the subject of time to the forefront. I’m often imagining how long these paintings as artefacts have already been around; how long they will last, and how they will change over time. I wonder if their importance is shifting and changing.”

He mines the past for his subjects and uses its passing to influence the distortion. Jake takes the weight of history and empties it onto the canvas, making it float into nothing.

“I’m very interested in the layers of history that have gone before us, much of which have been printed in our heads somehow, like a visual memory. But as time passes, that becomes faded and distorted. And of course, many histories are missing, blanked out or twisted. I think considering and re-considering the past informs what happens in the future. I think about these original reference paintings being created with a sense pride, power and importance. Perhaps that is now being chipped away, both metaphorically and physically. My paintings are in some way addressing all this. Someone recently described a set of my paintings as seeming to evolve each time they looked at them. I really liked that idea and reading of the work.” 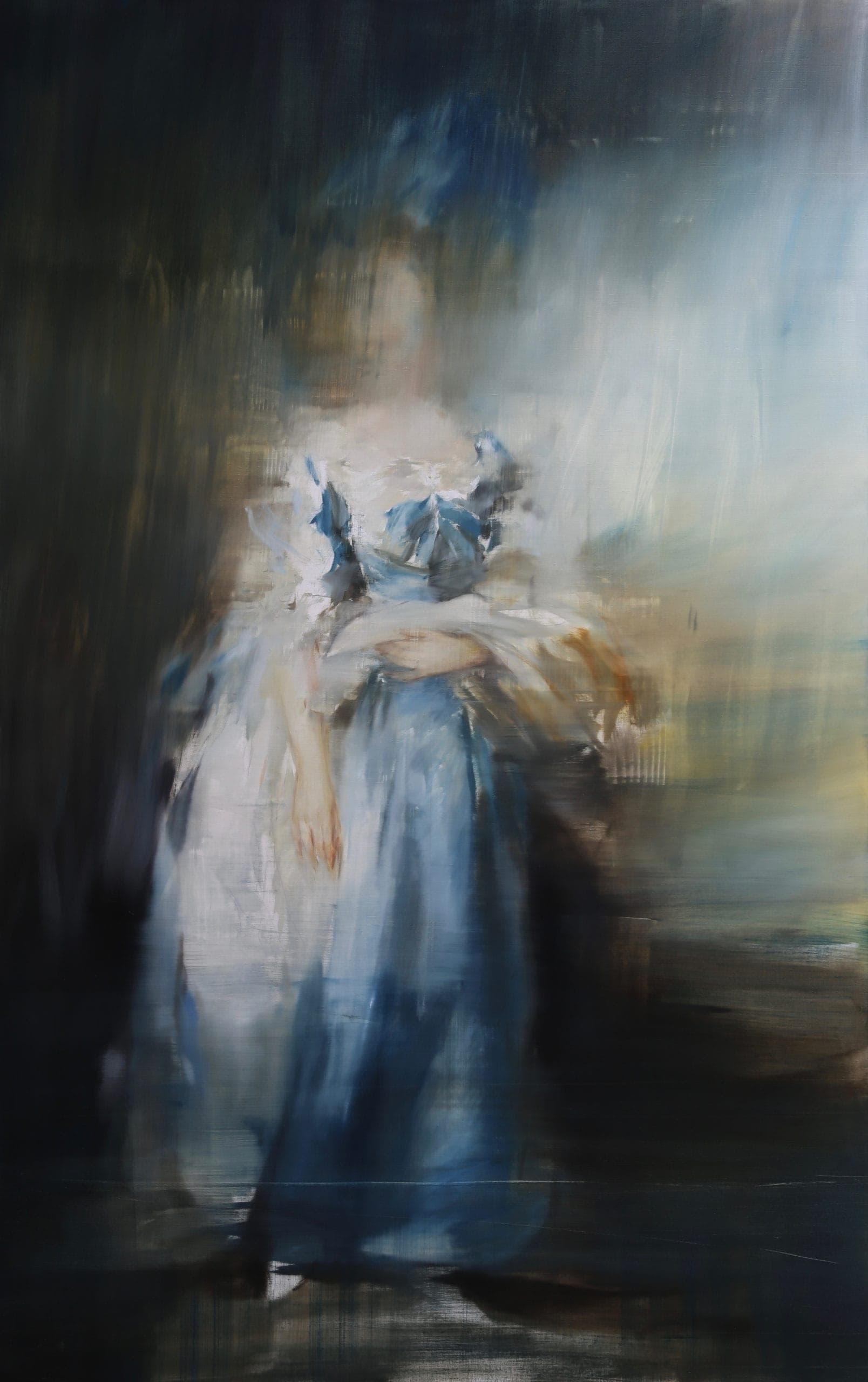 With Jake’s focus essentially in doctoring these grand old portraits, is he trying to show up class and aristocracy as a hollow and callous entity?

“To me at least, my paintings don’t feel as if they are always about the real-life person depicted, or necessarily a direct criticism of the subject and the time in which they lived. The impression of the original figure appears as a facade, they almost feel empty in a way. I’m not trying to communicate one particular thing in doing this, I like to leave the work open to different interpretations.”

Within the work, horses gallop into non-existence, portraits of people in elegant gowns and finery are made into irrelevant husks of grandeur. Could one interpretation be that Jake is disfiguring these people?

“Occasionally my reworking of a piece feels like a disfiguring, but often it’s much more about a distortion, a shift or change in the emotional atmosphere of the painting. I enjoy moving the narrative away from a depiction of power and more towards fragility, away from certainty and towards ambiguity. For me, the paintings become more about the process of creating the work, and then the reading of it. It’s important to me to open up questions and possibilities rather than to be too specific.” 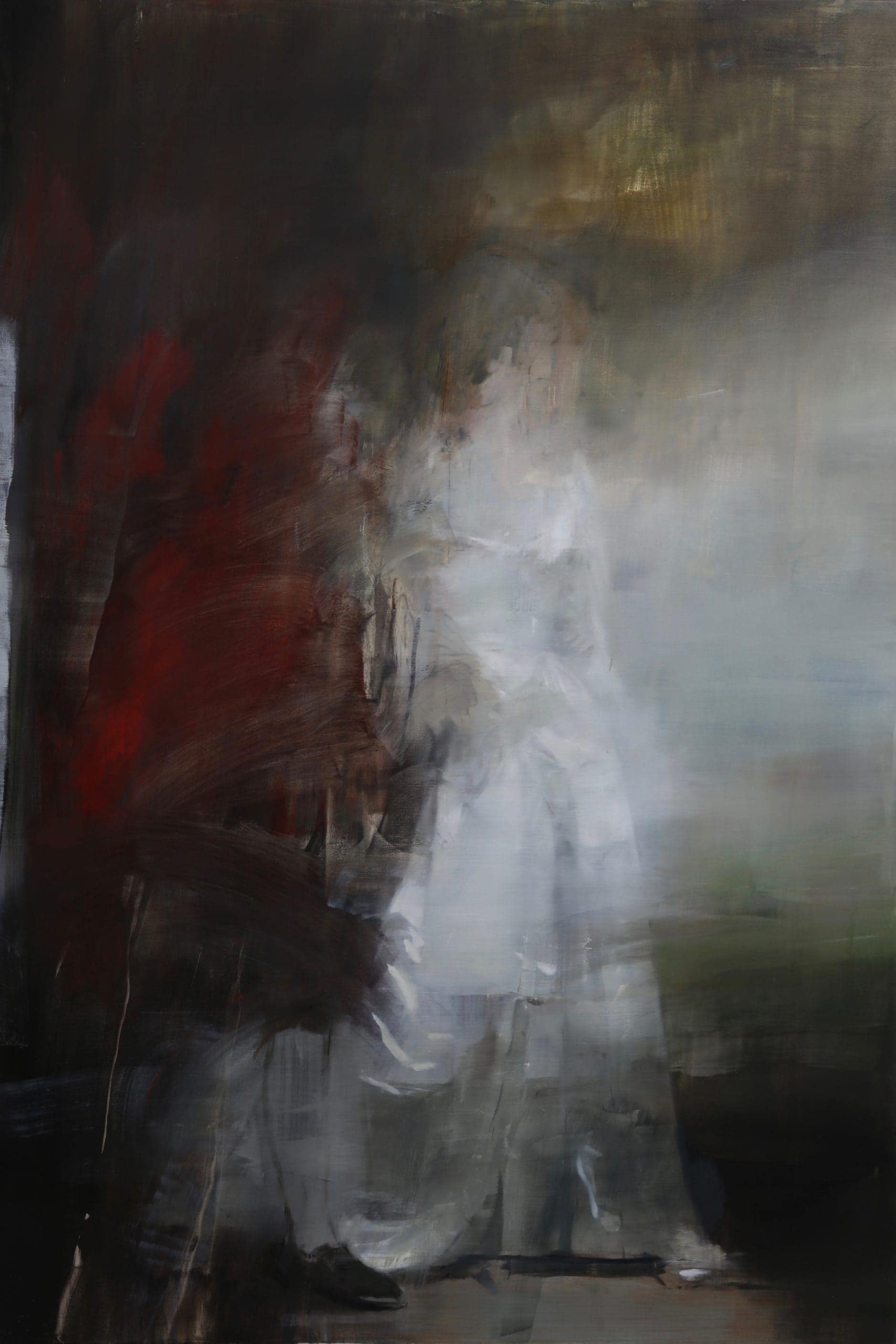 Where the paintings Jake is distorting were almost entirely about the person, their position, power, and wealth, Jake is looking to explore the process and inherent fragility of an image. To explore these themes, I asked how he enters this state, what the process has to be like to allow this kind of product.

“I like to allow the process to be free, for ‘mistakes’ to be made and accidents to be analysed and incorporated into the work. I can struggle with an area or a problem for hours, and then it suddenly seems to go into a direction that feels unknown to me. When it all comes together well, I get a real buzz from that.” 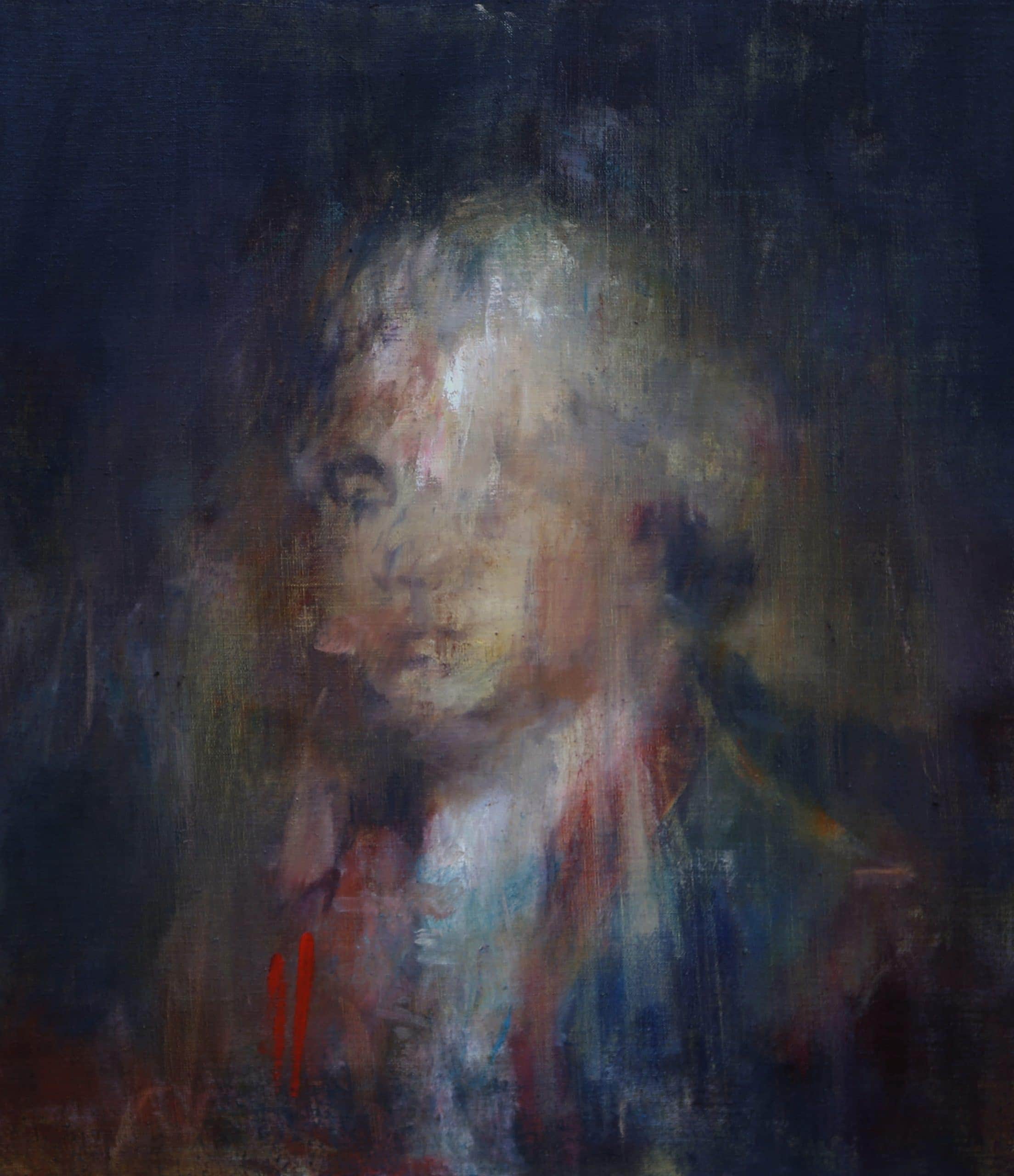 Time passed and many felt their identities fade having been locked up, shut inside, lacking a stable reality. Surely this had an effect on Jake’s work, so I asked Jake if he felt more focussed as a result of lockdown.

“Not really! It has occasionally made me wonder why I’m spending all this time in a studio on my own! There are little pangs of that, but during the start of lockdown, when I couldn’t go into the studio for a while, it nearly drove me mad. In many ways it’s a huge relief to be able to get to work and get lost in the painting for a while.”

Jake’s paintings are easy to get lost in. His work throws out so many ambiguous visual clues; of time, power, fragility, the act of painting, the role of history, that it grows with each viewer’s glance. As a result, Jake’s work will accumulate history, creating new chances for interpretation, new contexts to be viewed within, that mark him out as a painter with an intriguing future ahead.

Wu-Tang Clan redefined hip hop when they started putting out music in the early 90s. With plenty of time to kill, Sammi Gale turns his attention to the kitschy kung fu films and niche religious ideology that inspired the music of a generation. 5 MINS  /  2 days ago

I saw the best scarves of my generation destroyed by neglect

Throughout the summer, largely hidden from human eyes, an epidemic has been raging whose casualties are only now becoming clear. I’m talking, of course, about London’s clothes moth plague.  4 MINS  /  6 days ago

Wormwood Scrubs is a huge neighbourhood-sized oasis in West London unbuilt on since ancient times. HS2 recently announced plans to destroy a portion of it, a move met with fury and indignation by local residents. 2 MINS  /  12 hours ago
See More