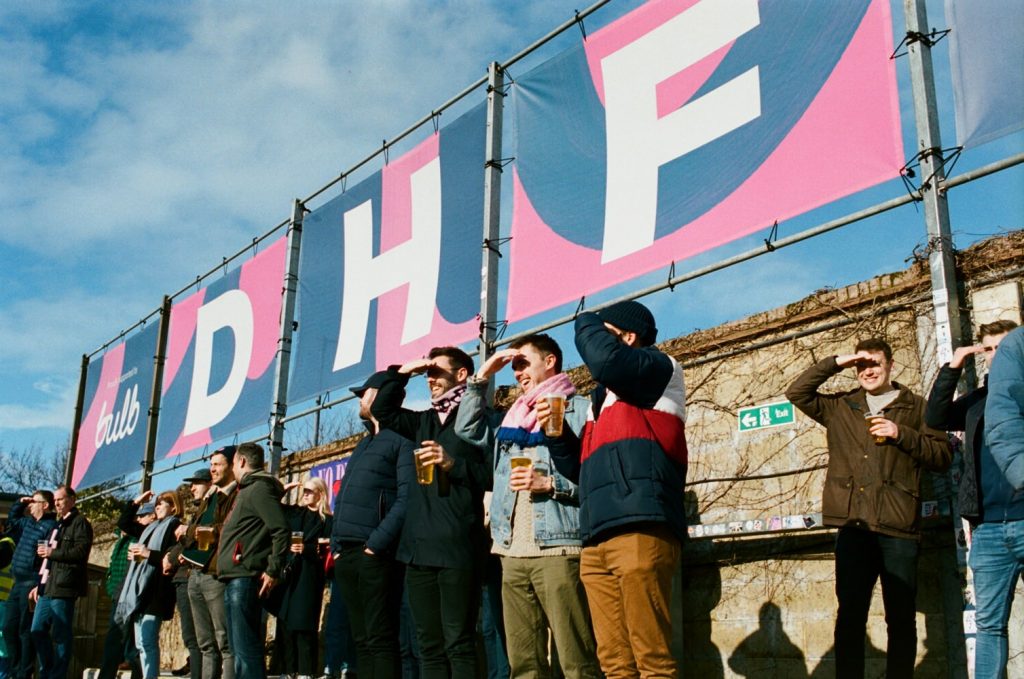 At the end of February, I went to what will likely be my last football match for a long time. The world has changed a lot since then, and although it might seem trivial, football’s absence has been one of the main ways in which I’ve felt this change. For so many fans, including myself, going to a match was a form of social escapism, a weekend ritual as immovable as church or a Sunday roast.

I usually went to watch Crystal Palace, the team I have supported since I was boy. As a footballing monogamist, my devotions were reserved for Palace. When they weren’t playing or were playing away, I’d go to Dulwich Hamlet, my local team. My relationship with them was largely pragmatic: they offered a way of continuing my weekend routine. One Saturday in late February, with Palace on a mid-season break, I headed to Dulwich’s home ground.

Champion Hill, Dulwich’s home ground, is easy to miss. It conceals its existence from the world, blending into southeast London’s gentle hills and faded red-brick estates.  Approaching the ground, as most fans will, via a supermarket car park, it’s not immediately apparent that there’s a stadium there at all. Reversing the trend for football grounds to spawn retail complexes, it’s the supermarket that dominates the space. Champion Hill is an appendage, confined to a corner of the car park. 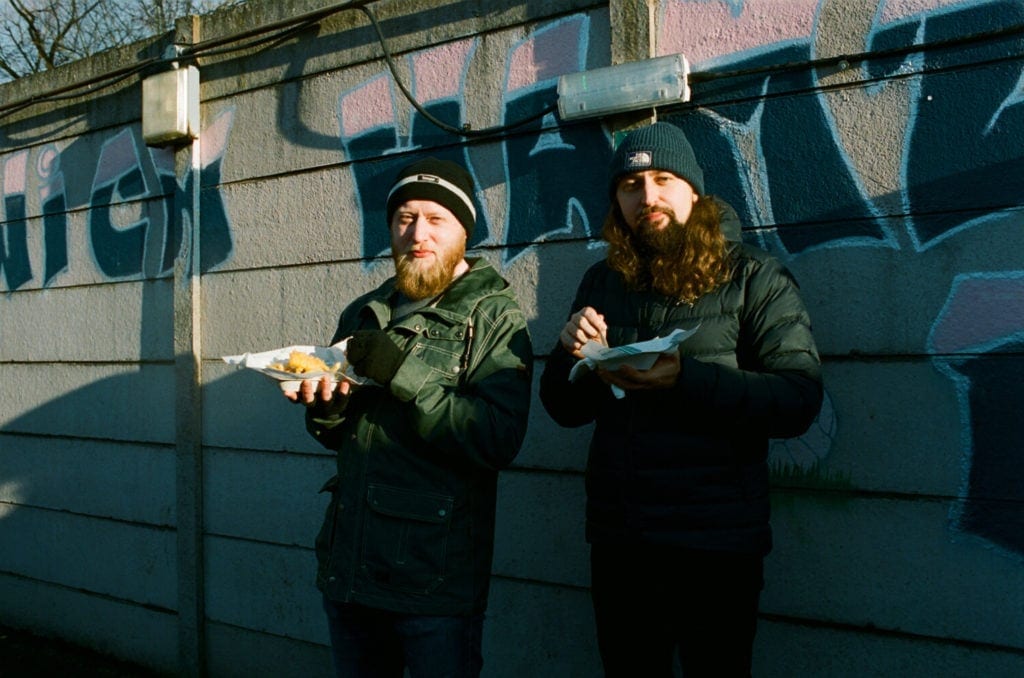 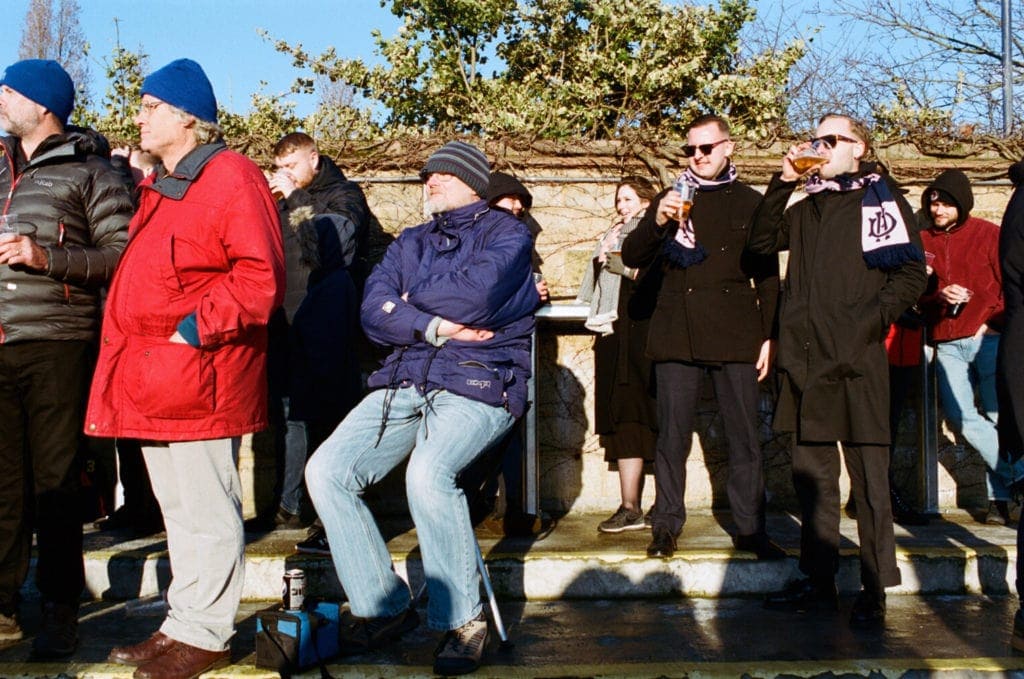 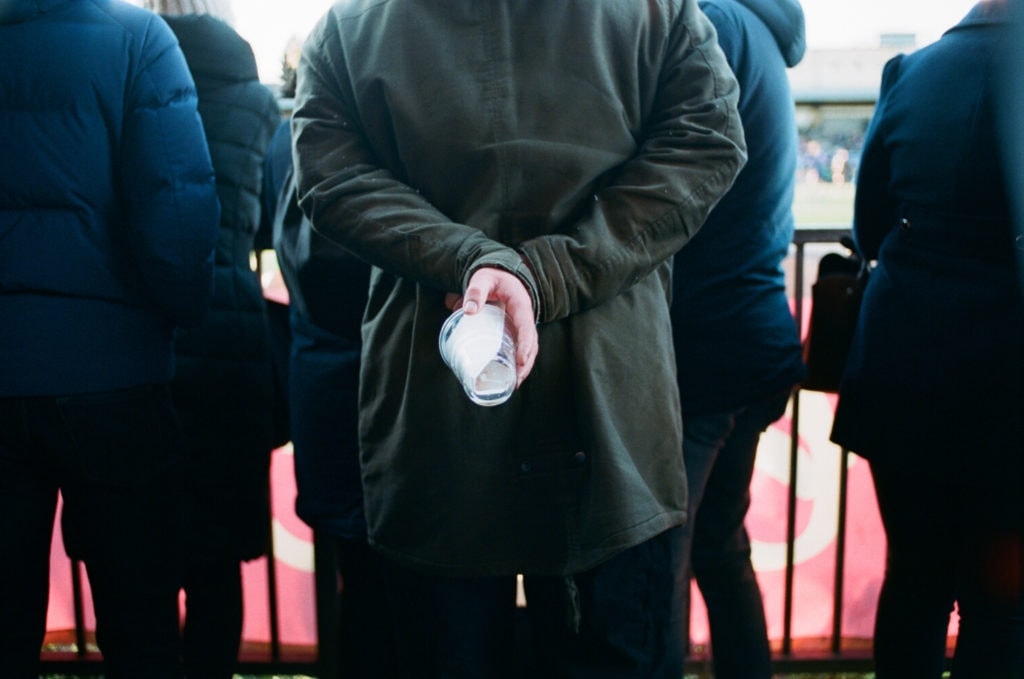 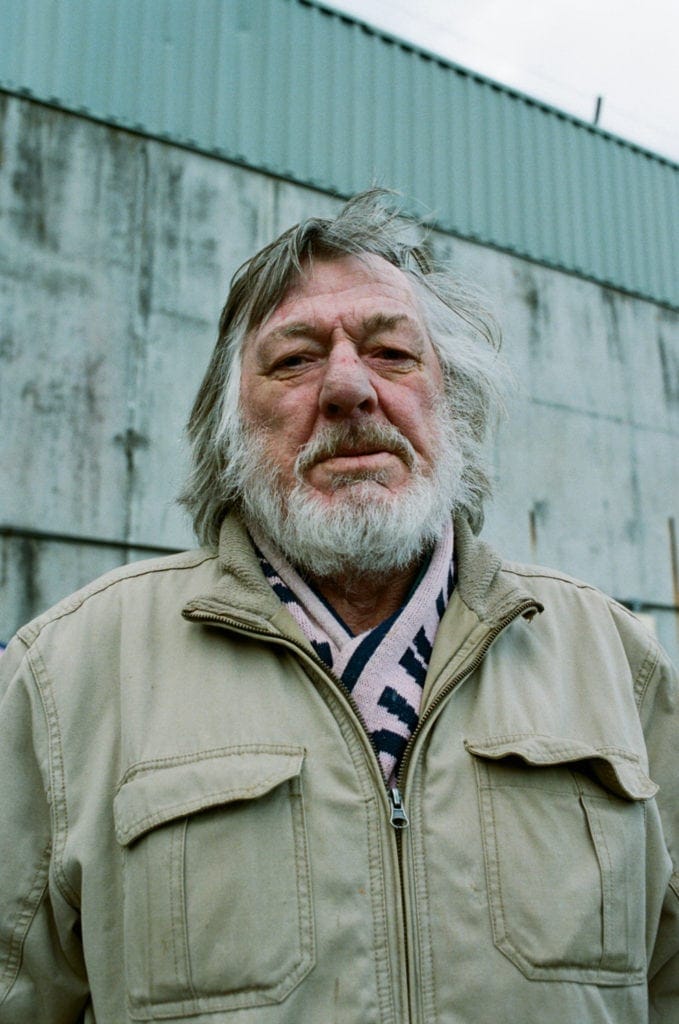 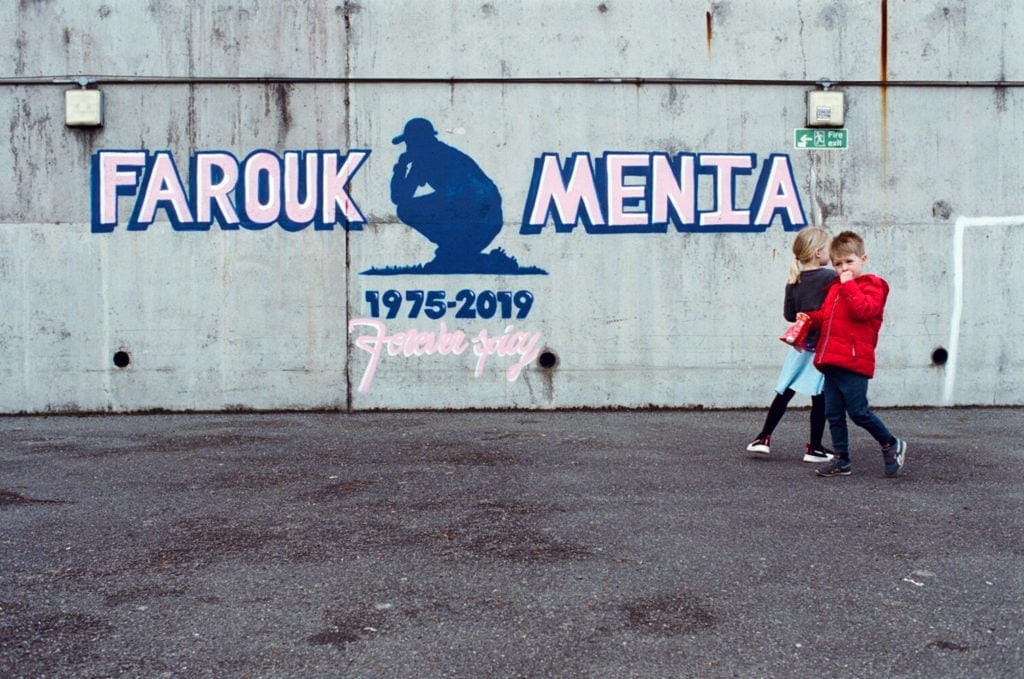 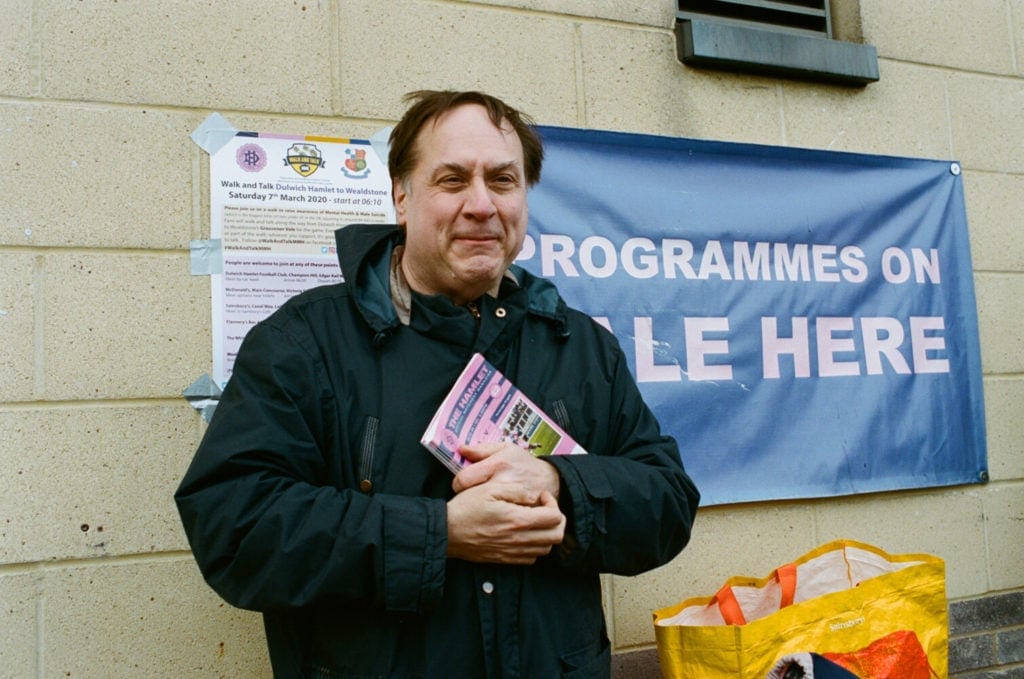 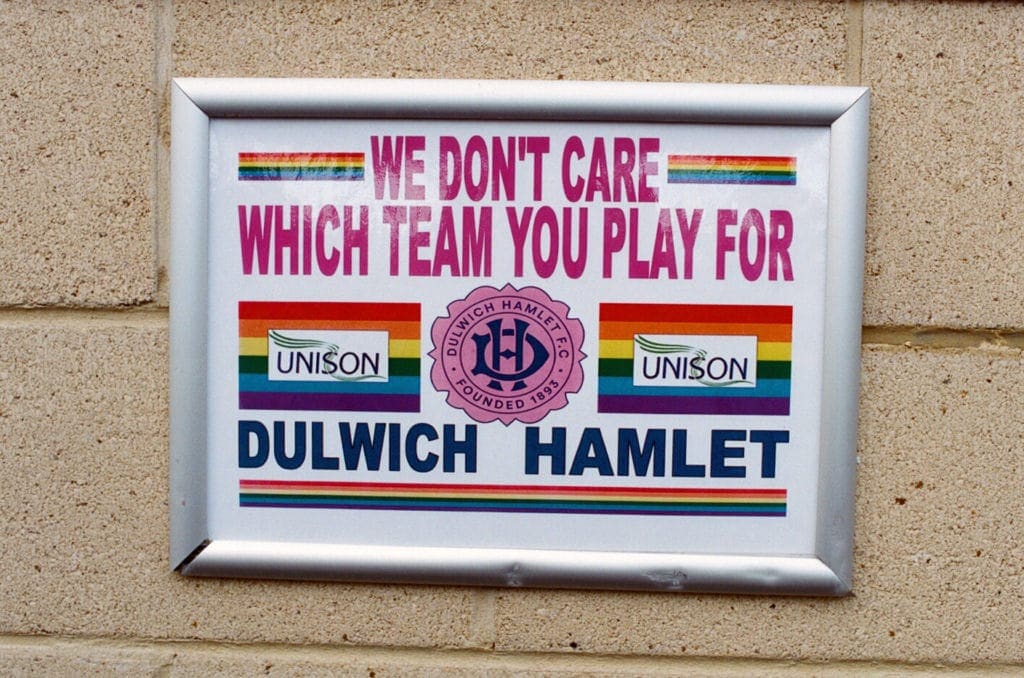 It turns out that Dulwich’s ground isn’t even the biggest stadium in London adjacent to a Sainsbury’s. That dubious honour belongs to Crystal Palace’s Selhurst Park, just a few miles away.  But though physically close to each other, the two clubs occupy different worlds. Crystal Palace are in the Premier League. Dulwich play in the National League South, the sixth tier of English football. Clubs at this level lead a precarious existence. Dulwich’s fans have fought a long fight with the ground’s landlords to prevent eviction; and today’s opponents, Tonbridge Angels, have recently set up a crowdfunder for pitch repairs.

In retrospect, the game counted for little: the league has since suspended play indefinitely. But we weren’t to know that then. Both teams were near the foot of the table and the stakes felt high.

Champion Hill is a stripped back football ground. Two sheltered stands run the length of either side of the pitch, while the most dedicated fans, in Dulwich’s case ‘the Rabble’ – an incongruous blend of non-league anoraks and South London trendies – gathered behind the goal their team was to attack. At half-time they switched ends. 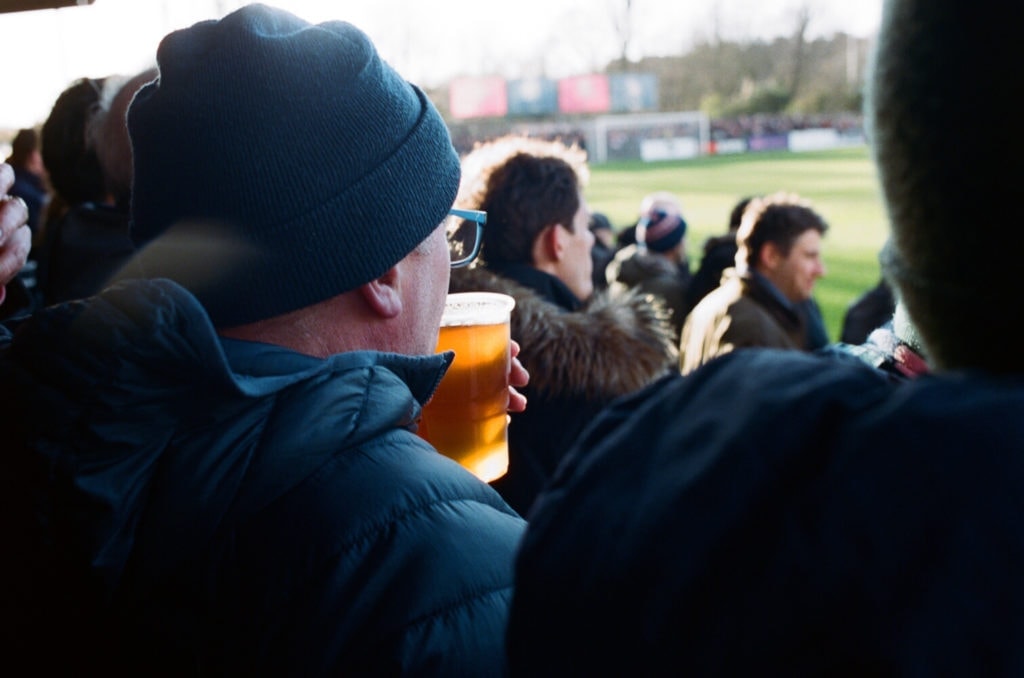 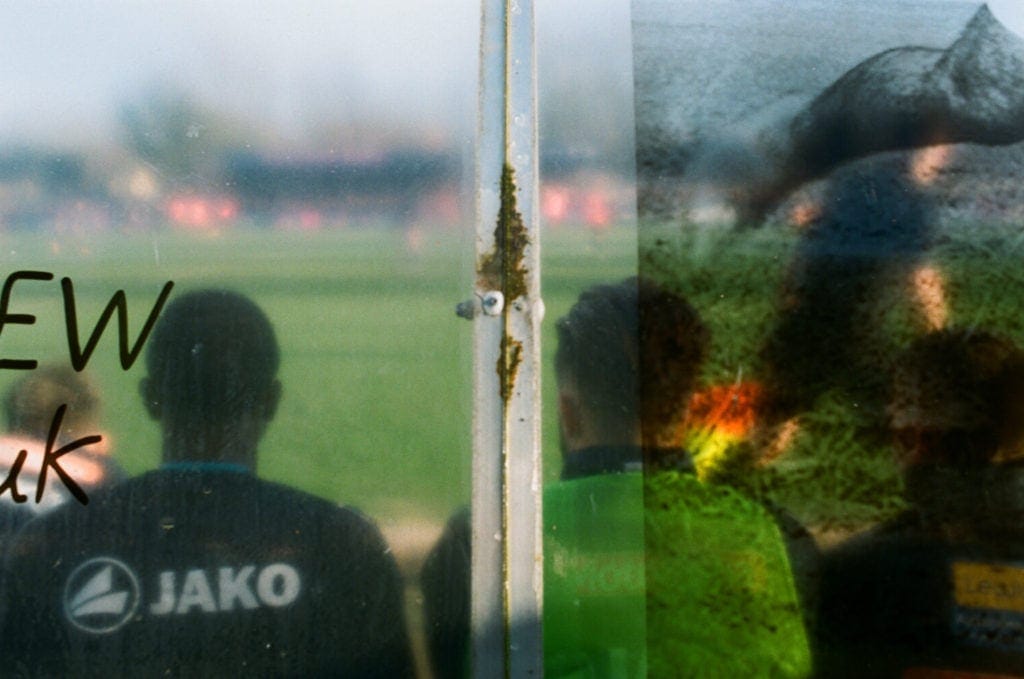 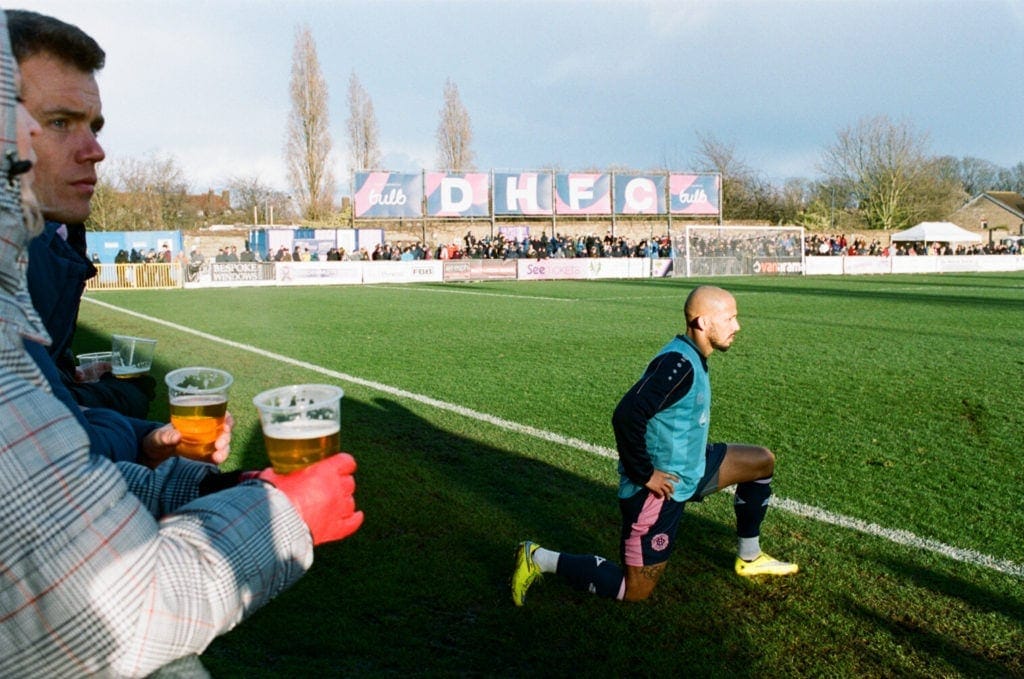 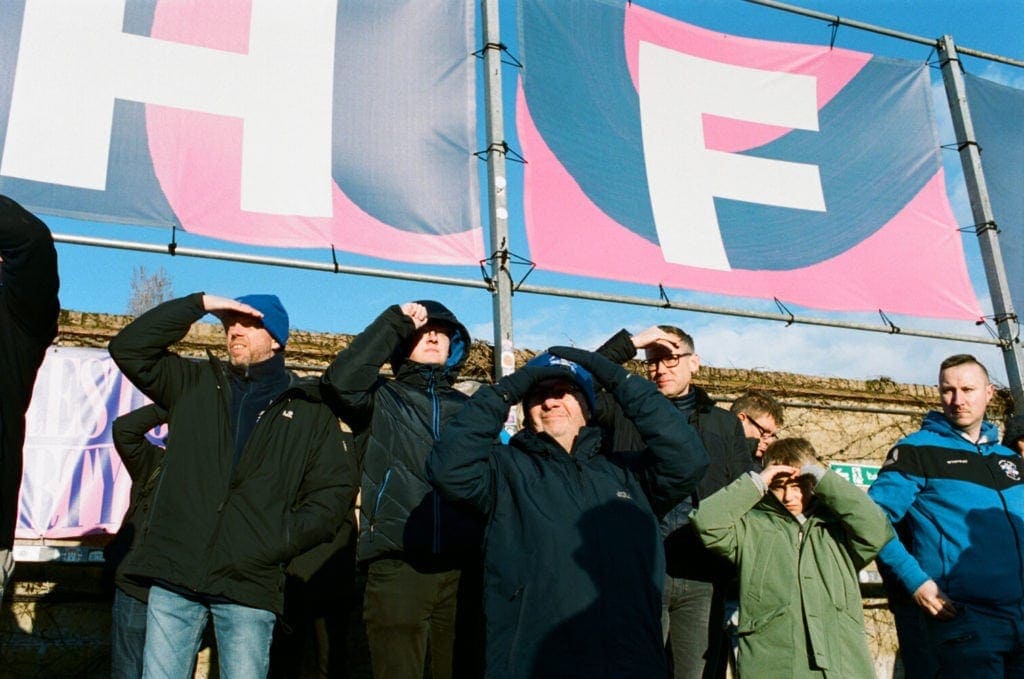 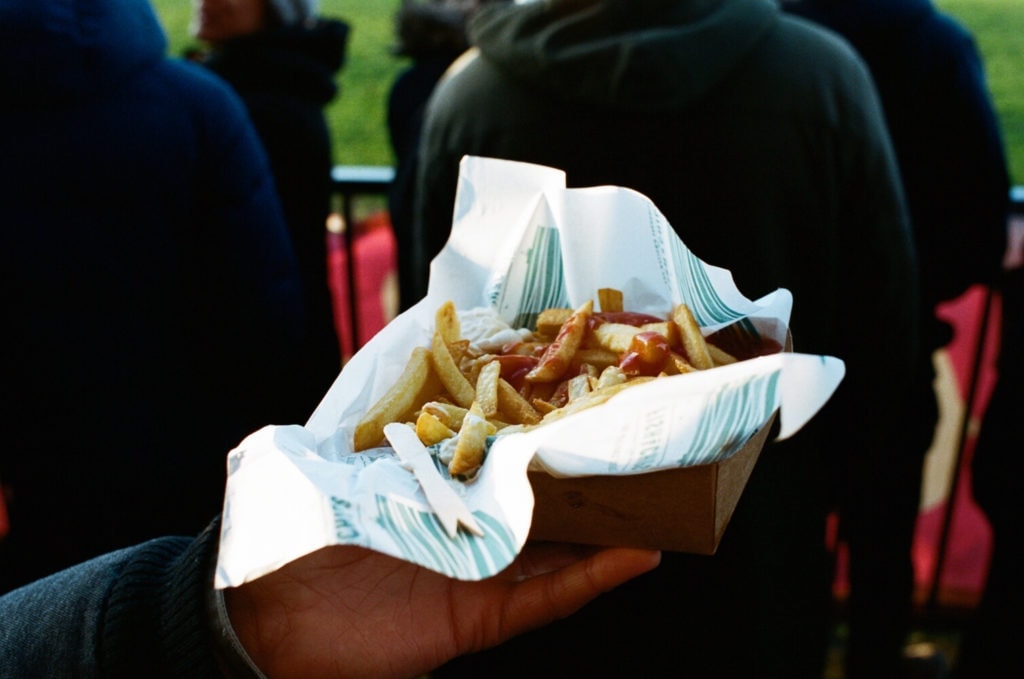 As the game began, I walked to the end where Tonbridge Angels’ fans had gathered. A few heads peaked up over the wall behind them, hoping to catch the action for free.

The first person I spoke to happened to be the chairman of the club, Dave Netherstreet.  Unlike Dulwich, who are able to draw on crowds of nearly 3,000 spectators for home games, Tonbridge average closer to 300. Around 100 of their fans had made the short journey to South London. Dave wasn’t jealous, he said, of Dulwich’s ability to draw a crowd, he just hoped Tonbridge could one day replicate their success. As we chatted, one of Tonbridge’s own rabble, a dishevelled man holding a copy of the Metro and a plastic bag of tinnies, slurred “Fuck off Dulwich” as the home team attacked. Apparently not everyone shared Dave’s goodwill.

There’s no doubt that the players heard these insults. What Champion Hill lacks in grandeur, it makes up in intimacy. Only a waist-high railing separates the fans from the pitch. Tonbridge’s pissed John Motson aside, this proximity reigned in the boundaries of hostility: insults were less barbed than in a Premier League ground.

Instead, a gentler mockery prevailed. A father and son stood behind the Dulwich keeper, teasing him throughout the match. The dad suggested that the mud patch on the keeper’s behind made it look like he’d had an accident. “Keeper, you’ve pooed your pants.” 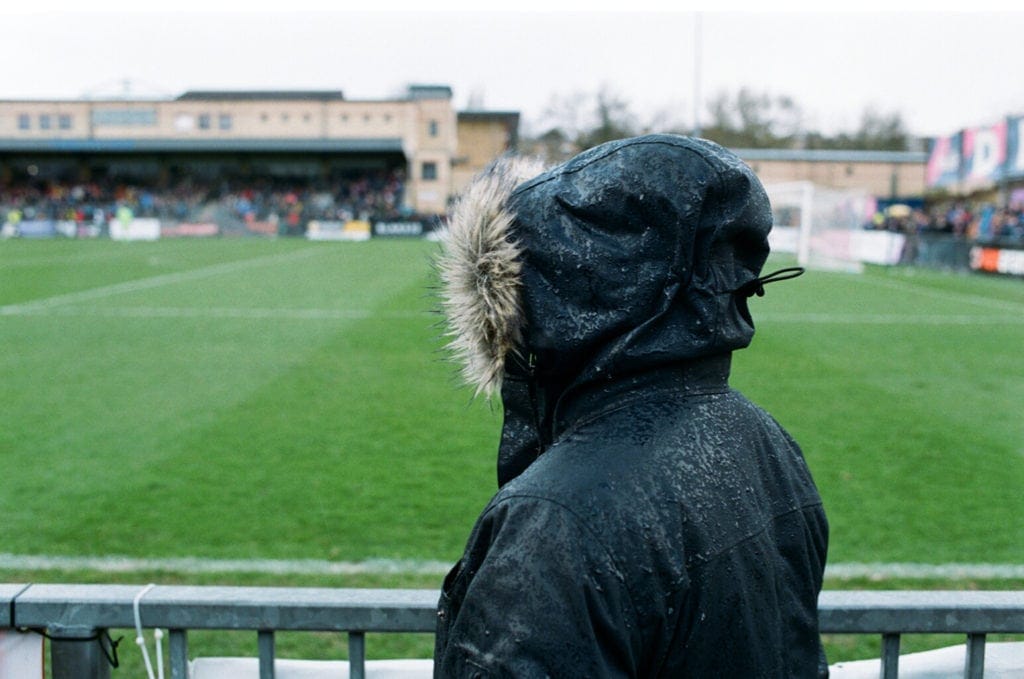 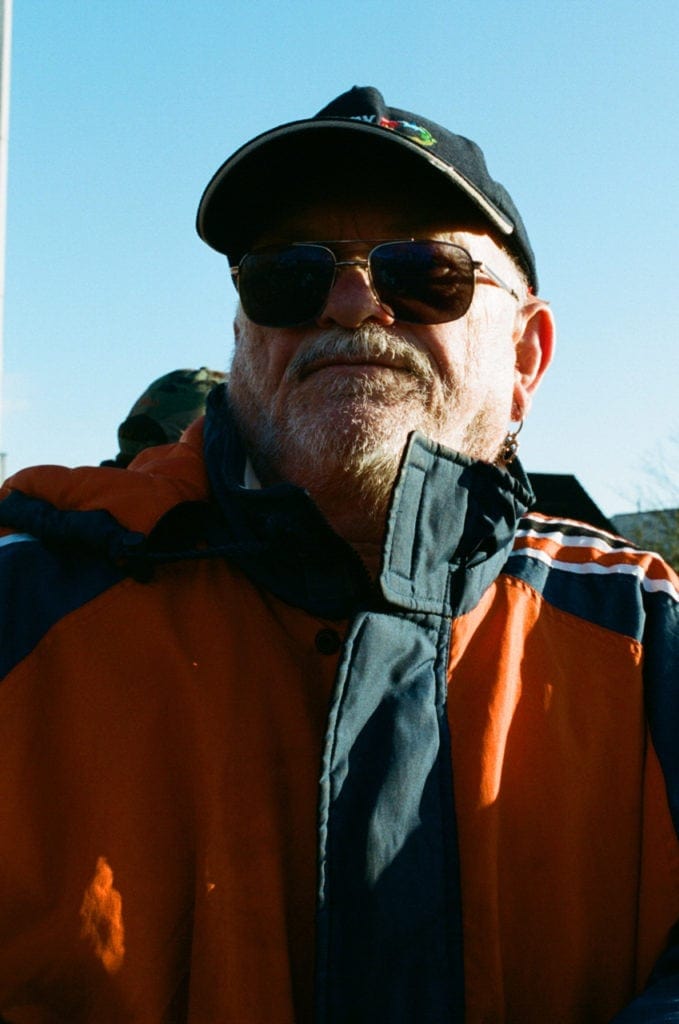 Fans and players are not only close on the pitch – lives off it are just as near. The players for Dulwich Hamlet and Tonbridge Angels are part-timers and have jobs outside of football. As I walked behind the substitutes’ bench as the game was being played, I overheard a Tonbridge Angels player telling a friend that he’d recently been made redundant. Tonbridge Angel’s midfielder, Ben Greenhalgh, once won a reality TV competition called Football’s Next Star, the prize for which was a contract at Inter Milan, one of Italy’s biggest teams. Greenhalgh looked like a stockier Cristiano Ronaldo: unfortunately for Greenhalgh, that’s where the resemblance ends. Since being released by Inter nine years ago, he’s played for six non-league English clubs. If his start in the game was unusual, his subsequent nomadic career is typical of this level. He is a football tinker, peddling the promise of potential finally realised from club to club. Sadly, it doesn’t seem quite to have happened.

As Greenhalgh looked like a denser Ronaldo, so the other players at Champion Hill were squarer imitations of elite players: shrouded in the myths of their talent, top-level footballers seem otherworldly in the flesh, an impossible combination of muscularity and lightness. These players looked as if they’ve been diagonally expanded on a computer to fill a template more suited to the roughness of sport at this level.

And they needed to be robust for this match. Several players looked uncomfortable in possession, but all were uncompromising in the tackle. The ball spent a lot of time in the air. The home team had the better of the play, and their forward duo of Dylan Kearney and Danny Mills, a rangy tangle of limbs, caused problems for the Tonbridge centre backs. Somehow Dulwich missed from a yard out. After about twenty minutes, the game began to slow and fragment, as both teams committed fouls to catch their breath. From then on, urgency was expressed in how hard the players lobbied the referee for decisions, as much as in the pace of the play. 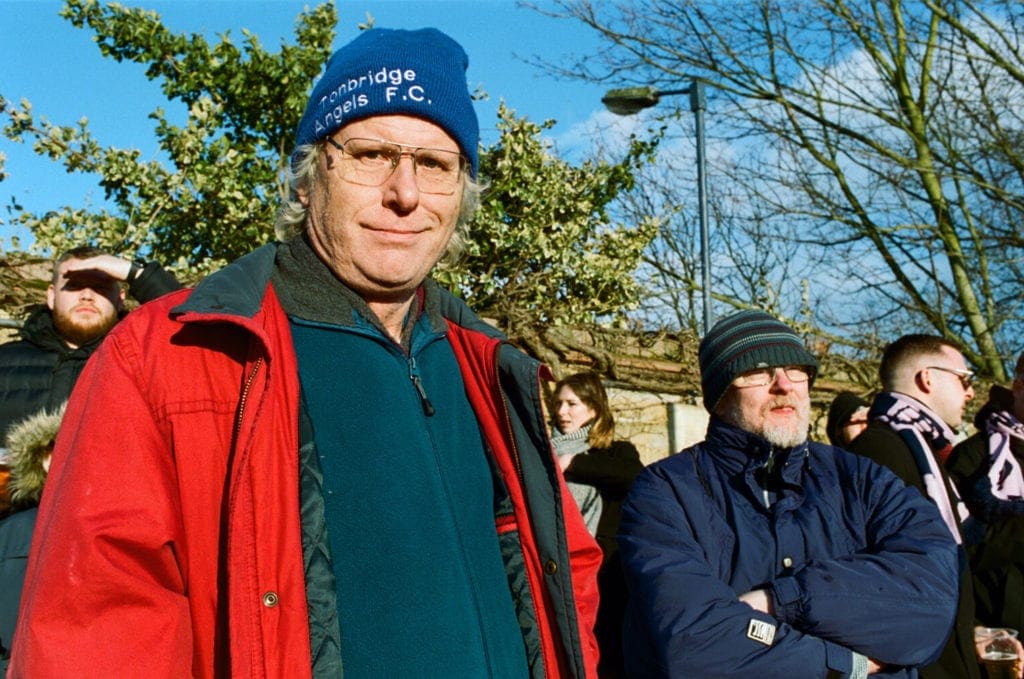 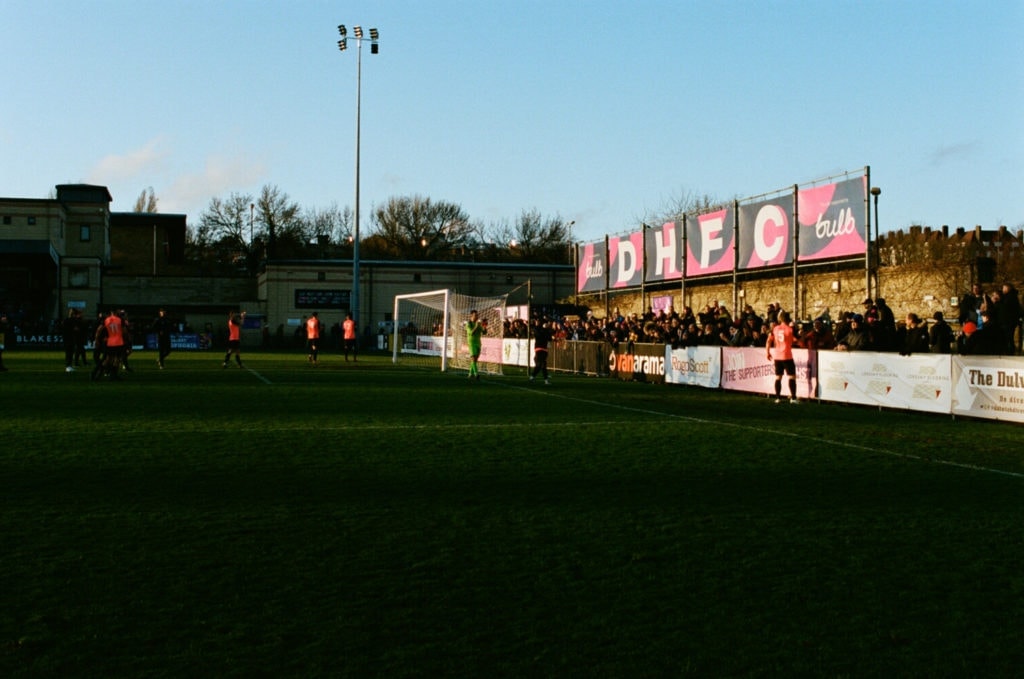 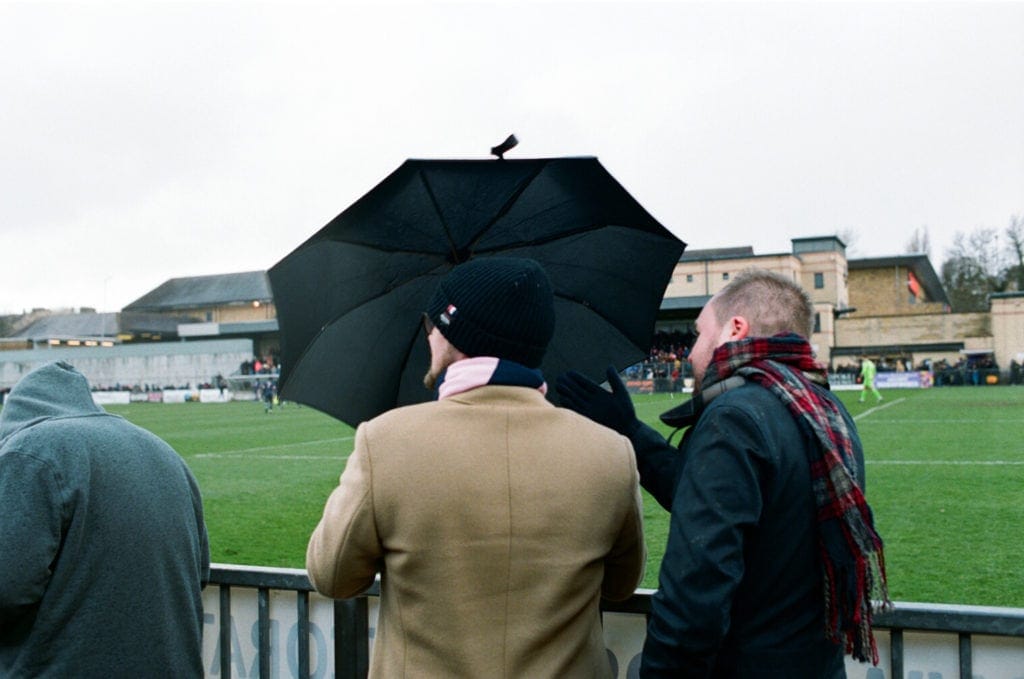 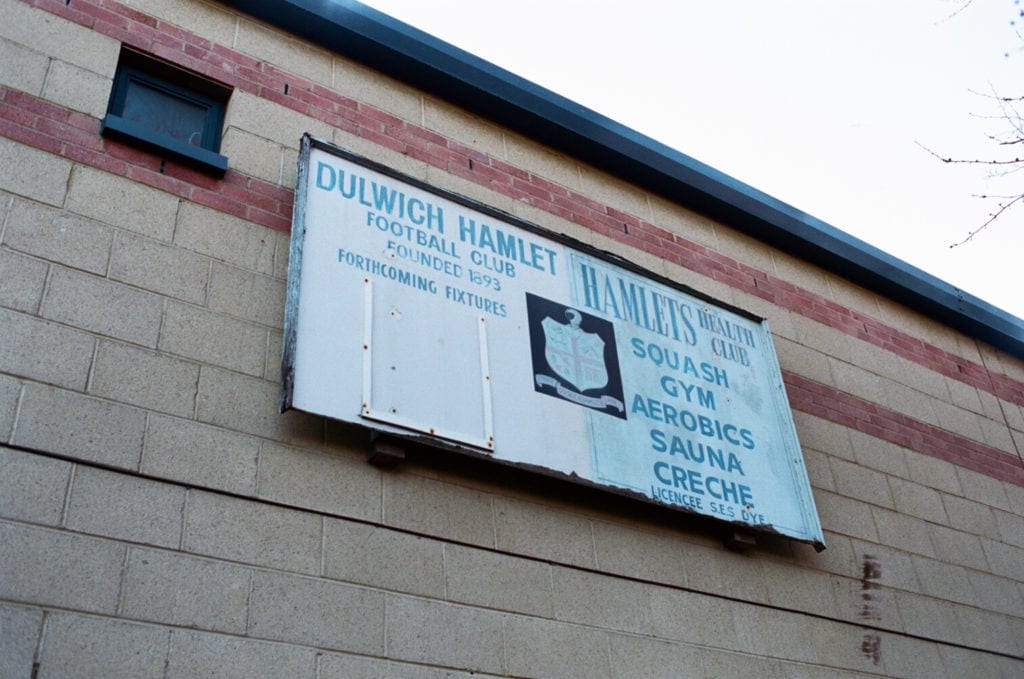 The members of the Rabble who were not in the queue for the loo or the bar began to chant louder as the game moved from the first half to second half. And what a rabble it was! The dogs on show suggested that this was a mixed congregation: pitbulls, bulldogs, poodles, spaniels and dachshunds mingled freely.  Middle-class women joked with seasoned non-league boozers. As they posed for a photo, two men kissed. Stood next to them, two older Tonbridge fans, dressed head-to-toe in club merchandise, intensely discussed their team’s tactics. Their parallel devotions are equally accepted at Dulwich.

A downpour towards the end of the match tested the Rabble’s devotion. Many of them headed into the clubhouse for another pint. Deprived of the Rabble’s infectious energy, Dulwich’s players waned.  Tonbridge were in the ascendancy and with five minutes to go, they scored from outside the area.

It’s disappointment as much as glory that forms a fan’s bond to their team. And I was disappointed as the full-time whistle blew. Had I just become a Dulwich Hamlet fan?

Community is a programme that charms all the right, currently stressed parts of the brain. It’s the perfect show to watch, or re-watch, in your time alone in your room. 4 Mins  /  4 days ago

“Whenever I’m able to free my mind from its tracksuit-clad cage, I imagine myself drifting above the rooftops and soaring over London. Now I can see, like a thousand-strong Zoom call, everyone I know, everyone I’ve ever met, and they’re all doing the exact same thing: nothing.” – Alexis Self 3 MINS  /  11 hours ago

Pablo Larraín’s Ema is a magnetic portrayal of power and chaos in modern-day Chile. With a blistering soundtrack and dirty dancing, freedom clashes with responsibility, and ecstasy meets a heavy kind of hurt. 4 Mins  /  4 days ago
See More