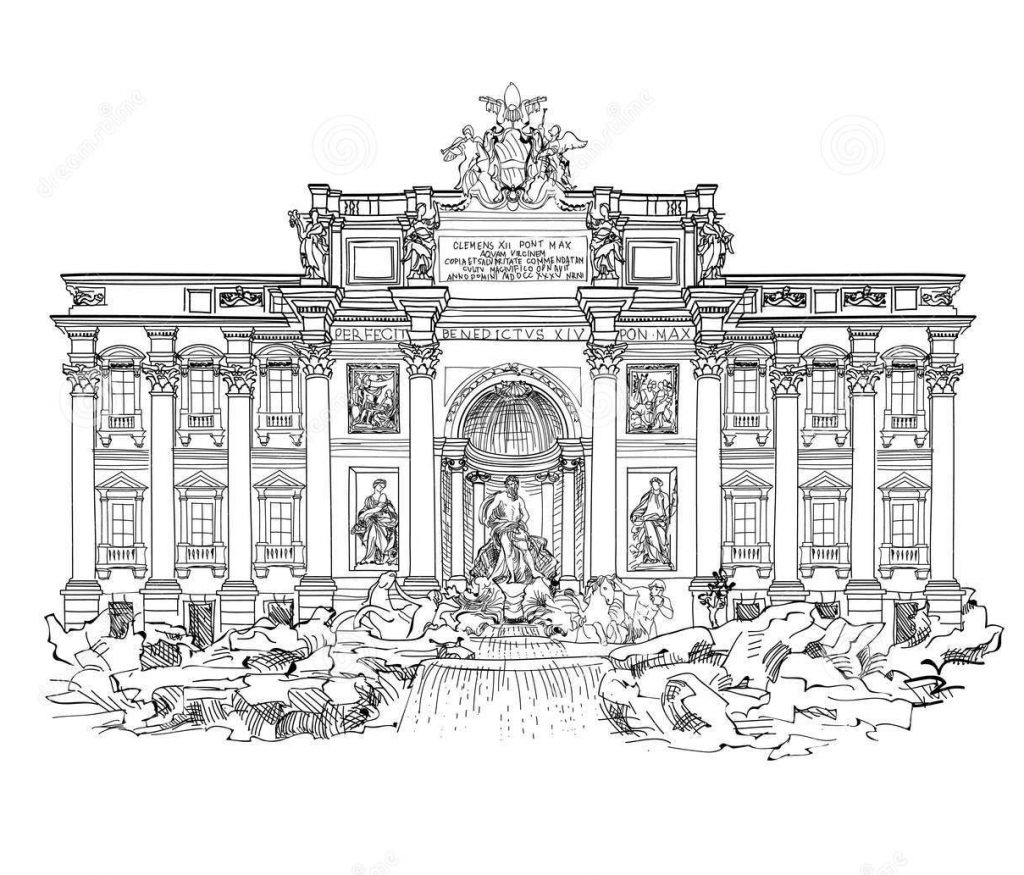 When I was 8 or 9, I saw a black and white Italian film from the 1960s. To my child’s eye it was boredom distilled – no colour, no talking animals! And subtitles!? The horror! But then, something happened. There was a woman, wearing a beautiful black dress, dancing through the moonlit streets of Rome with a white kitten. Turning a corner, she approaches a fountain – a fountain of immense proportion, growing out of hewn chunks of rock in full-blown Baroque magnificence. She wades in, soaking her hair, her evening dress. “Marcello!” she calls, to a man in a suit. “Come here!” Even as a child I found the scene captivating. It was like a dream, this spectacle of Rome.

The film was Federico Fellini’s 1960 masterpiece, La Dolce Vita. And the fountain? Rome’s Fontana di Trevi. Sitting at the heart of the city, the Trevi nestles amongst cobbled streets and grandiose Baroque churches. Its name derives from the contraction of two Italian words, ‘tre’ and ‘vie’, meaning ‘three roads’, so-called because the site marks the junction of three paths where the ancient Roman aqueduct, Aqua Virgo, once terminated. Spanning 22km, above and below ground, Aqua Virgo tapped a pure spring to the east of Rome, serving crystal clear water to the capital for more than 400 years.

because everything took so long to build, there’s a spirit of collaboration coursing through Rome

But Rome, as we know, wasn’t built in a day. It’s a hackneyed adage, yet it captures the lifeblood of Roman architecture: because everything took so long to build, there’s a spirit of collaboration coursing through Rome, a dialogue between epochs and also between people – the architects, sculptors, artists and visionaries who shaped the eternal city. Like so much of Rome, the story of the Trevi is one that spans centuries and features cameos from ancient Romans, a handful of Popes, and more than a dozen architects and sculptors, all-told.

THE TREVI WASN’T BUILT IN A DAY

At some point in 1629, so the story goes, Pope Urban VIII decided he didn’t much like the old fountain at the Trevi site; it was naff and in need of a redesign. This was the seventeenth century: Caravaggio was already dead, Bernini had smoothed off the last edge on Apollo and Daphne, and St Peter’s – the church to beat all churches – was finally finished. In other words, the coals of the Baroque were burning. So Urban turned to Bernini, the darling of Roman sculpture, and commissioned a new design. Bernini consented, drew up preliminary sketches, and promptly died. The plan for the new fountain was abandoned for almost a century.

And then, in 1732, Pope Clement XII decided to revivify the project. He launched a competition for the best in fountain design, and the challenge fell to architect Nicola Salvi. For almost twenty years things went smoothly and, by 1751, the fountain was half finished – but so was Salvi. He died in February of that year, leaving its completion to architect Giuseppe Pannini and a quartet of sculptors. At last, in 1762 – more than 130 years after Urban set the Trevi’s wheels in motion – the fountain was completed.

The finished thing is an extravaganza of late Baroque, tipping into the over-matured decadence of Rococo. It’s built from travertine, the marble-like stone that also built the Colosseum, and it bears traces of all of its architects (including touches from Bernini’s initial plans). More like theatre than classical statuary, its ornate sculptures depict the ‘Taming of the Waters’, a scene replete with Tritons, shell chariots, triumphal arches, and snakes. It’s mad, it’s decadent, it’s unashamedly Baroque. And it was absolutely made for cinema.

THREE FILMS ON THE FOUNTAIN

Fellini’s film wasn’t the first to feature the Trevi Fountain. In 1953, Roman Holiday had been released to critical acclaim, starring a young Audrey Hepburn flirting in Rome with a somewhat older Gregory Peck – and a bit-part from Trevi. A year later, Three Coins in the Fountain would tell the story of three American women looking for love in the romantic città di Roma. Throw a coin into the Trevi, legend has it, and you’ll win your heart’s desire (the spoiler’s in the title).

But no film has quite captured the magic and the majesty of the Trevi like La Dolce Vita. It’s hard to say just what it is about the scene that’s so compelling. In part, yes, its Otello Martelli’s breathtaking cinematography. And its something to do with the glamour of 60s Italian cinema. Its Anita Ekberg in her fabulous dress, its Marcello Mastroianni and his perfectly coiffed hair. Its the sound of the water, blending with the strange incidental music. Its the way the scene captures the end of a long night, seeing the sun rise at the end of the party. But perhaps, most of all, its the eery emptiness of the city, as the Trevi’s ancient waters spray for no one but Sylvia, Marcello, and a kitten.

ALL ROADS LEAD TO TREVI

Years after I first saw La Dolce Vita, I moved to Rome. I visited the must-sees – St Peter’s and the Colosseum, the Forum and the Spanish Steps – but I held back the Trevi; I was saving it for a late night stroll. Wandering through mazes of narrow streets, in the city where the laws of the compass cease to exist, I imagined myself turning a corner and finding the fountain in a lonely square, its streams playing like a glockenspiel on the under-lit surface of the water.

But so, it turns out, had everyone else. I sixth-sensed my approach to the Trevi, not from the sounds of the spray, but from the buzz of people. It was like I’d wandered into someone else’s party: there were people everywhere, people with cameras and people posing, people sitting and people standing, people talking and people gazing. There were police, too, patrolling as a deterrent to anyone hoping to recreate Ekberg’s wade (for which you can be fined up to €270) or to pinch a penny from the fountain (also a criminal offence, as one man discovered after making a fortune). And yet, standing amongst the crowds, I had to face the fact that I was one amongst the throng, that the fountain would never be empty for me anymore than it would for the person next to me: we were mutually assuring the destruction of a dream.

Over time, the Trevi became a familiar sight – and so did the changing cast around it. And then, one day, I came across an etching by visionary architect Giambattista Piranesi, which depicted the fountain at some point in the mid-eighteenth century – surrounded by people. There were people in carriages and people in wide dresses, people sitting and people standing, people talking and people gazing. There they all were, even then, and probably before, loitering around the terminus of the Acqua Virgo in times of antiquity.

Maybe this was the masterstroke of Fellini’s film – to capture a sight that can never been seen, something as fantastical as Piranesi’s imagined plans for Rome. Or maybe not; maybe La Dolce Vita is responsible after all for bringing hoards of giddy tourists to the fountain. Either way, the flocks are in the spirit of Roman collaboration: people are the soul of the city and the Trevi has a long history of them – and promises a long future with them too.

Wormwood Scrubs is a huge neighbourhood-sized oasis in West London unbuilt on since ancient times. HS2 recently announced plans to destroy a portion of it, a move met with fury and indignation by local residents. 2 MINS  /  13 hours ago

Wu-Tang Clan redefined hip hop when they started putting out music in the early 90s. With plenty of time to kill, Sammi Gale turns his attention to the kitschy kung fu films and niche religious ideology that inspired the music of a generation. 5 MINS  /  3 days ago
See More