Tinnies, spliffs and nature: how fishing became the sport for working-class lads - whynow 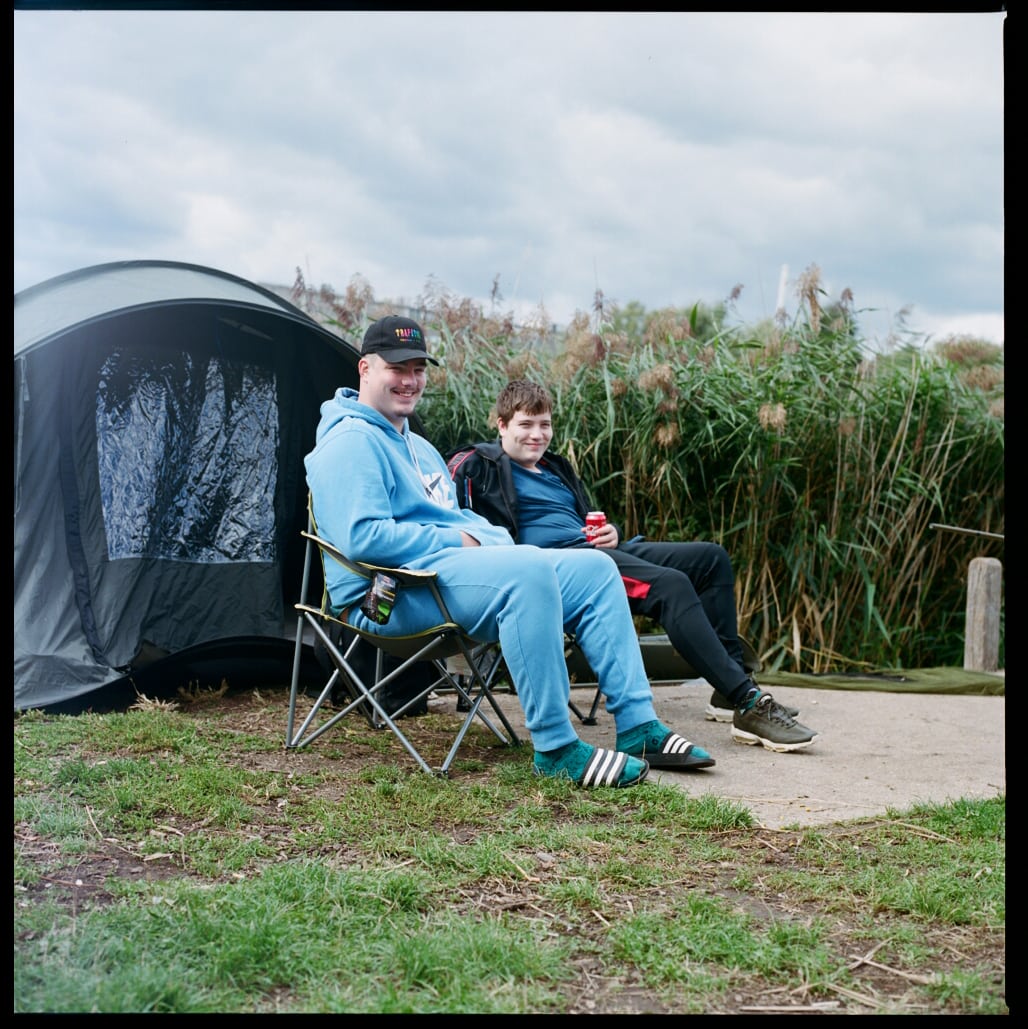 “Nah, not me please, mate.” I’ve just walked up to a fella called Alf and asked him for a picture. He’s at Burgess Park, standing outside a tent planted inside one of the many fishing bays that line the park’s lake. Inside a couple of his mates sit on decking loungers, sipping on pint cans of Stella. It’s just past midday, and the sun is barging past stubborn, grey clouds confronting unsuspecting eyes. Alf looks at me, sniffs, his eyes dart away from my gaze and then return within an instant. “I’ve been up all night, innit.”

Before moving to Burgess Park – situated in between Camberwell, Peckham and Bermondsey; a sort of homeless, recreational wonder – I hadn’t ever given much thought to who exactly I thought fishes. If you were to accost me with an assumption I would’ve provided an unfair, slightly cartoonish answer: unhappy, middle-aged midwestern American men. Who unsurprisingly come far and few between in England.

This supposition was challenged almost immediately on my arrival to my new neighbourhood. Each day I’d walk past the lake to catch the 66 bus, each day I’d see an array of characters fishing. Some old-timers, of course, but mostly young, working-class lads. For the first couple of months I found the situation interesting enough from a distance. I’d stroll by, almost voyeuristically look at them and walk slowly in an attempt to overhear something that would solve the mystery: what exactly draws these guys to fishing at a lake a stone’s throw from Old Kent Road? 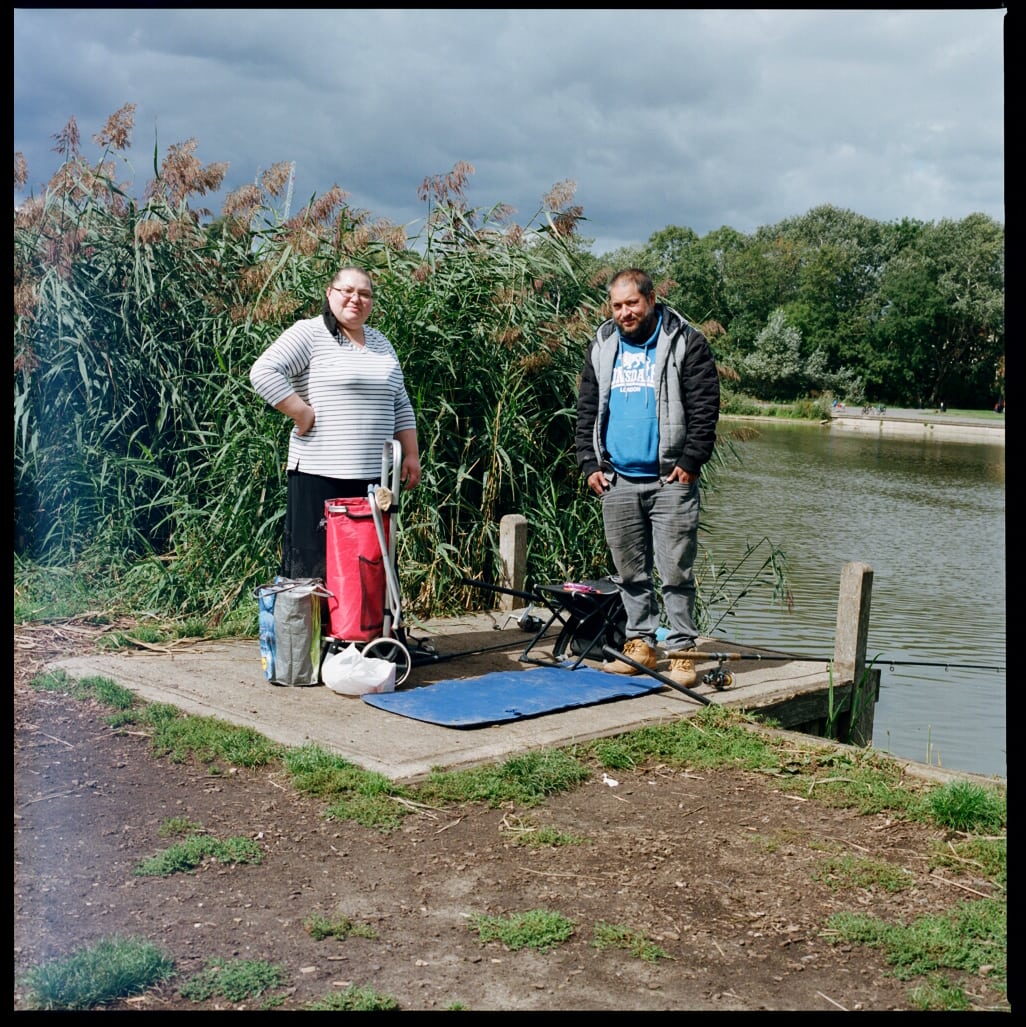 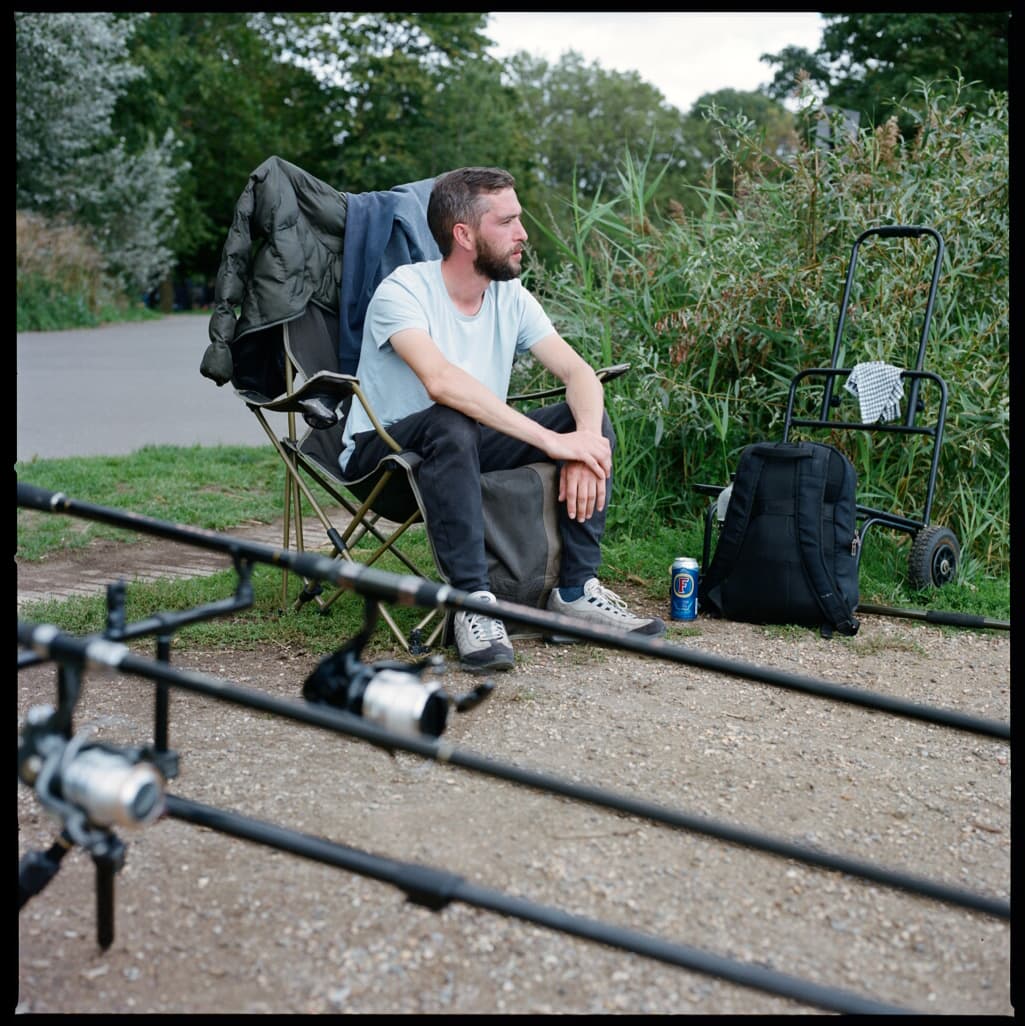 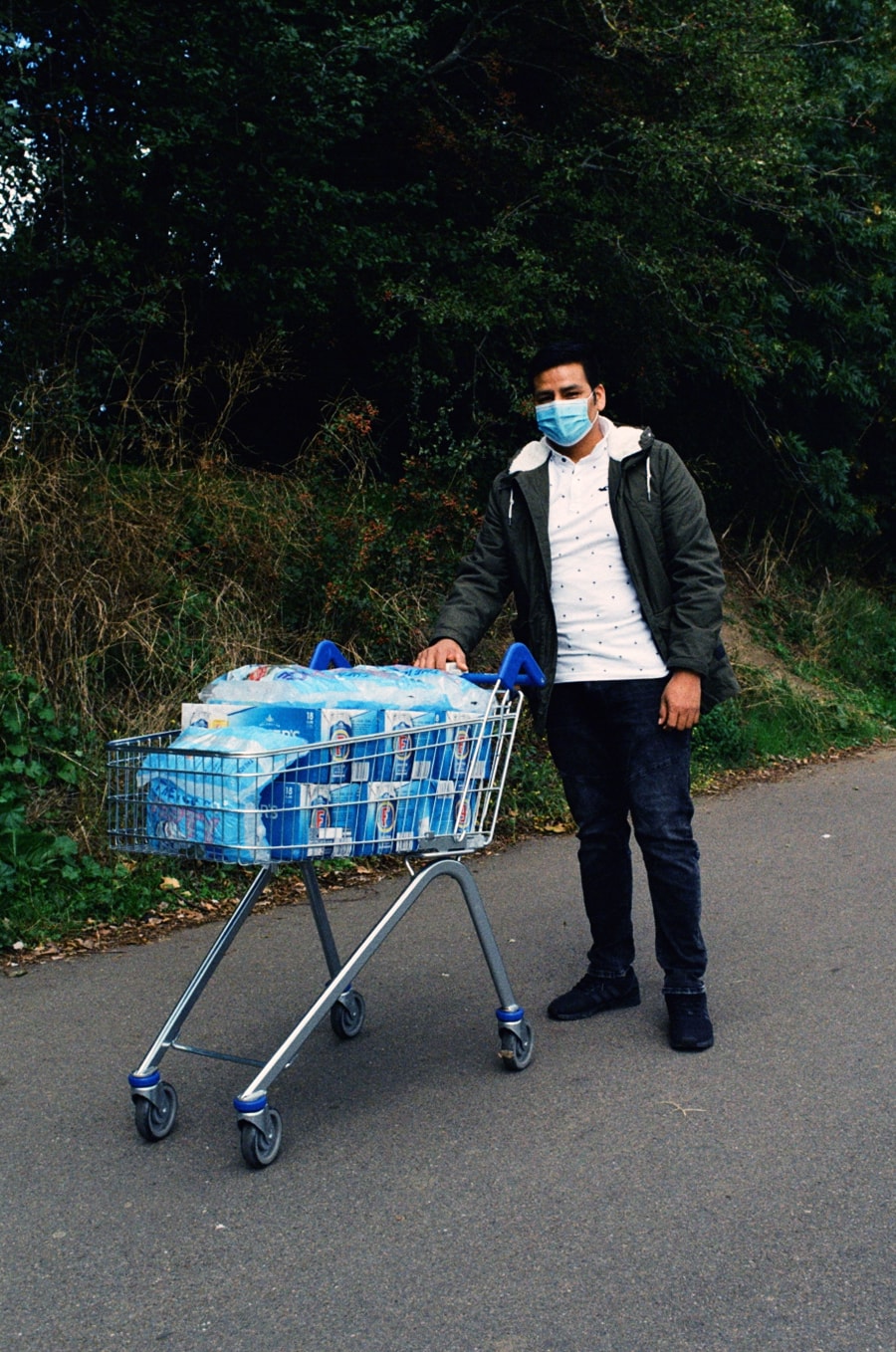 “Mark’s down there”, Alf says while pointing towards the tail end of the lake, closer to the heart of the park. “He’ll take a pic. Fucking poser loves it”. 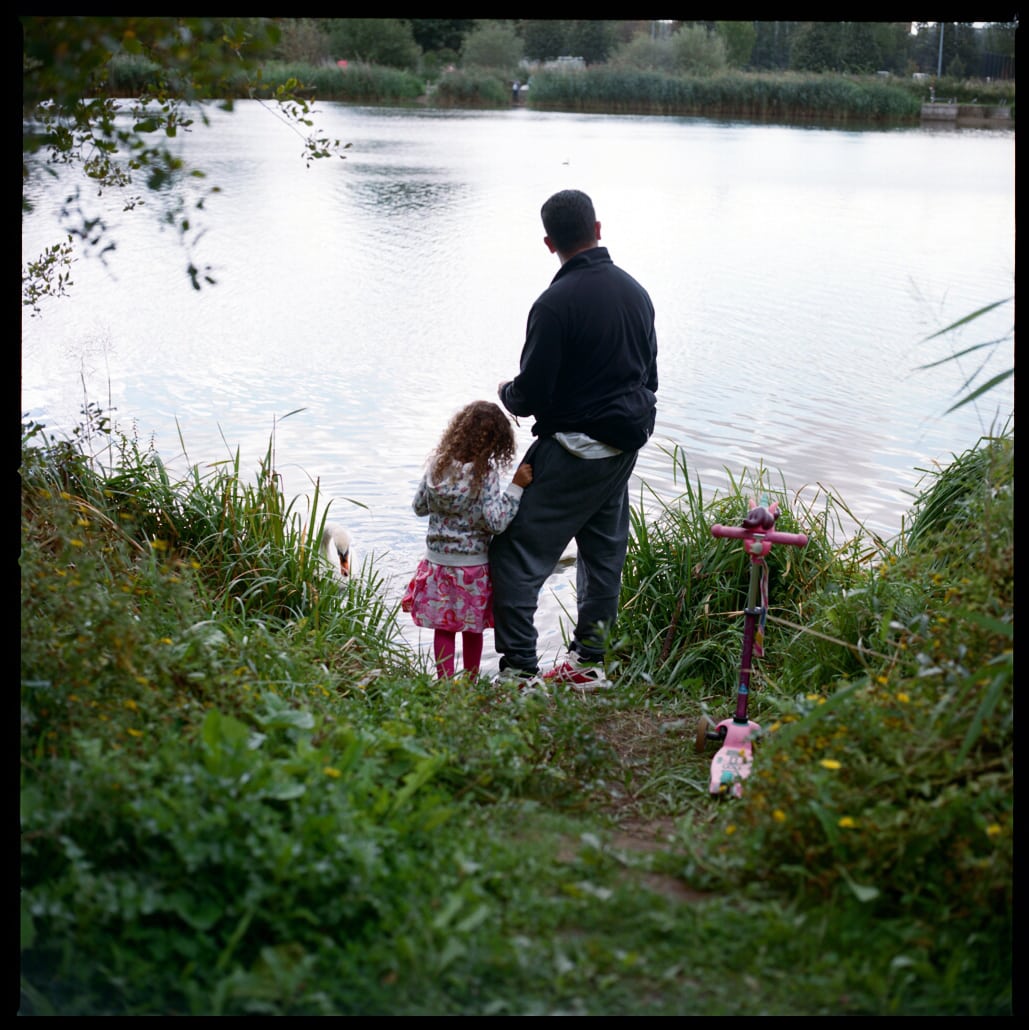 Walking that direction – and from my previous chats with the anglers of Burgess Park – the reasons for fishing start to reveal themselves like the sun through the sky. It’s social. Of course, it’s social. I walk past bays fraught with mates, they’re shouting to other bays ten steps either side of them. “How many have you caught today, Jez?”, someone whose name I didn’t catch shouts. He doesn’t wait for a response but smiles and laughs with his mates. You have to assume Jez hasn’t caught anything.

For an old friend of mine, Luke– Luke and I went to the same football and weed high school. We played in a band together. We learnt who we were on similar streets and at similar nights out, sometimes the same ones. We were raised in similar conditions, is my point– For my mate Luke, fishing is a connection to the dormant, instinctive part of the brain. He has angled himself for several years now, and for him it’s a release from the humdrum, he tells me. Something visceral, and yet entirely relaxing. Plus, he enjoys being able to get blazed and drink outside. 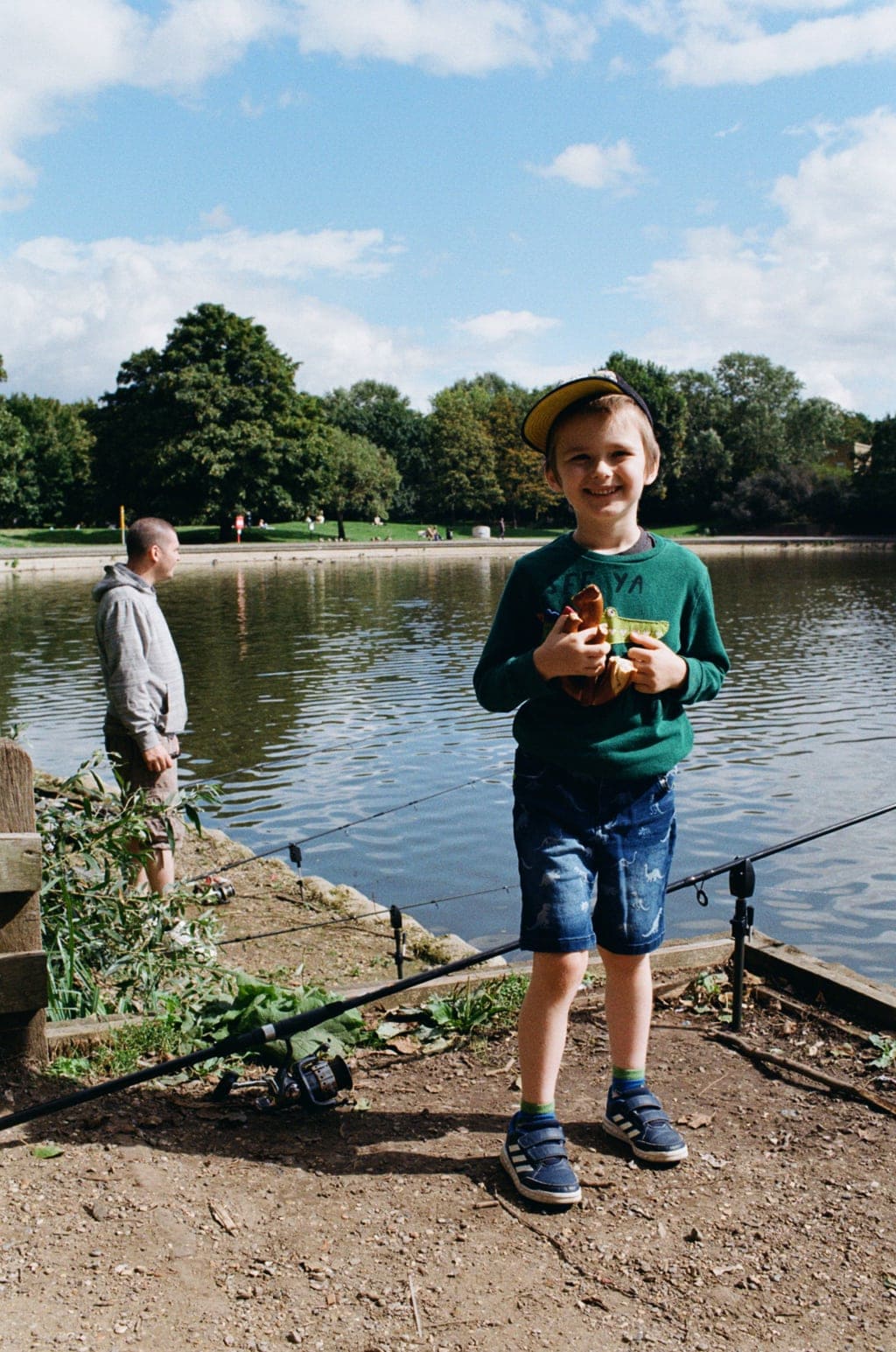 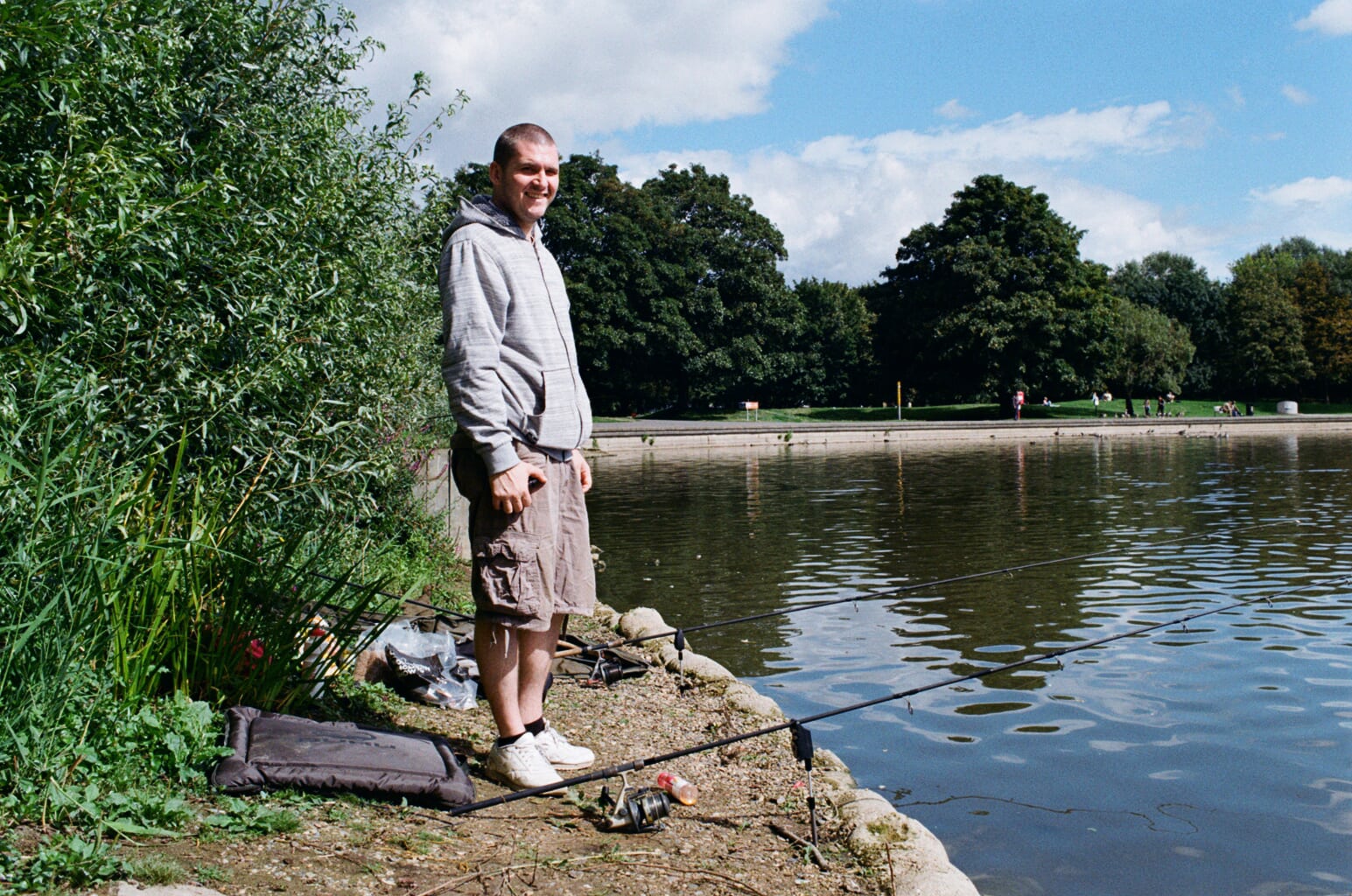 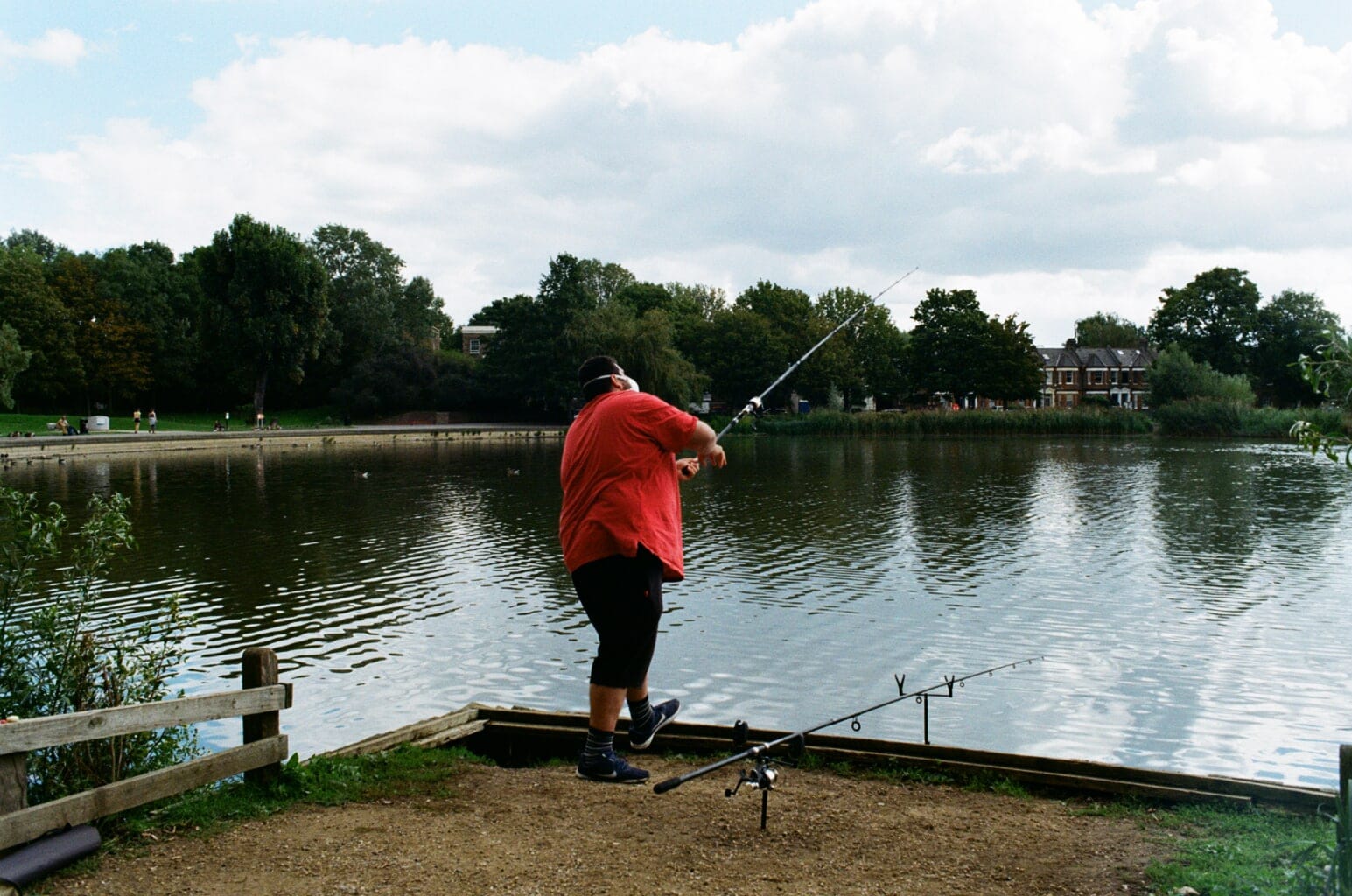 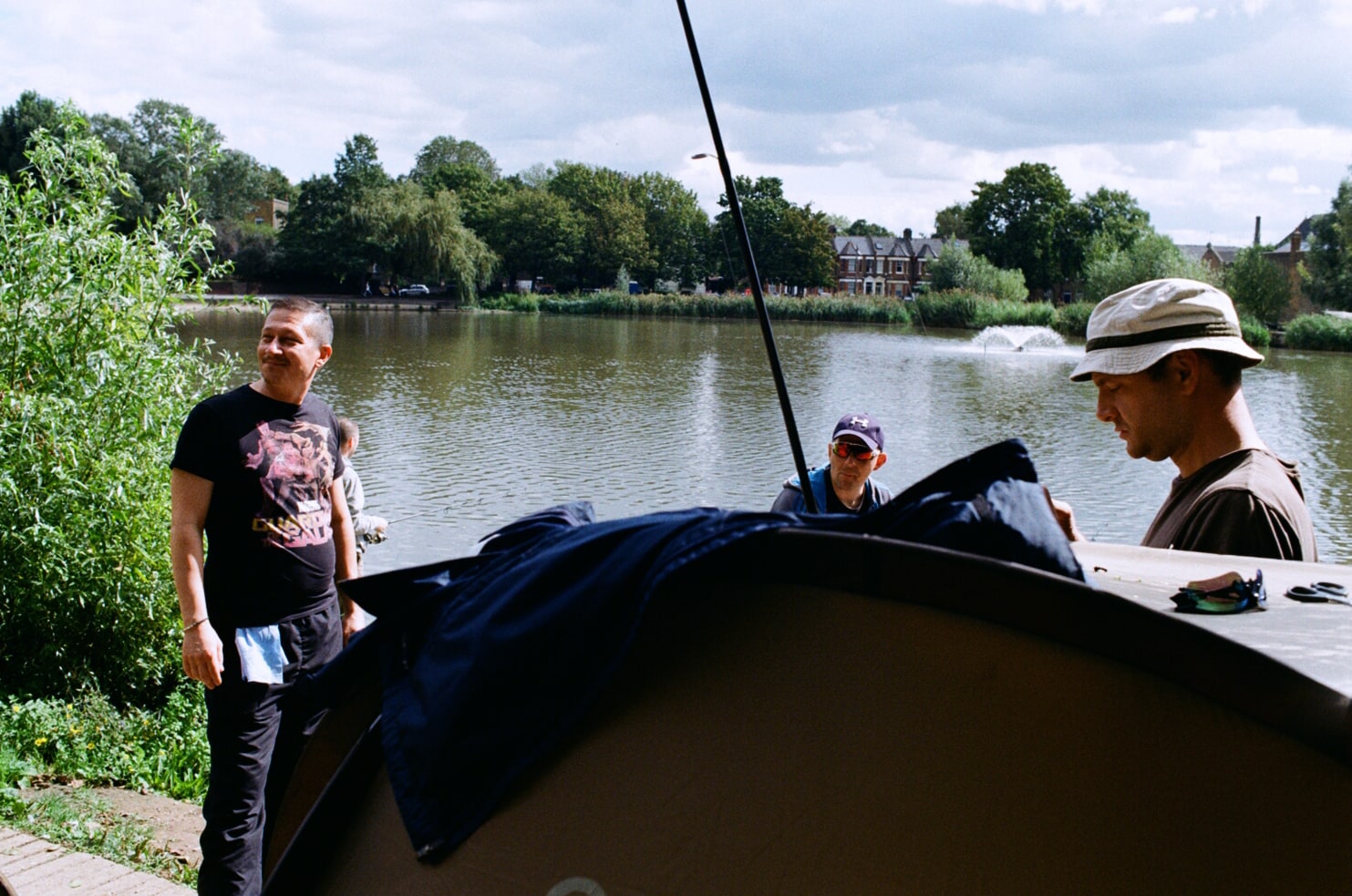 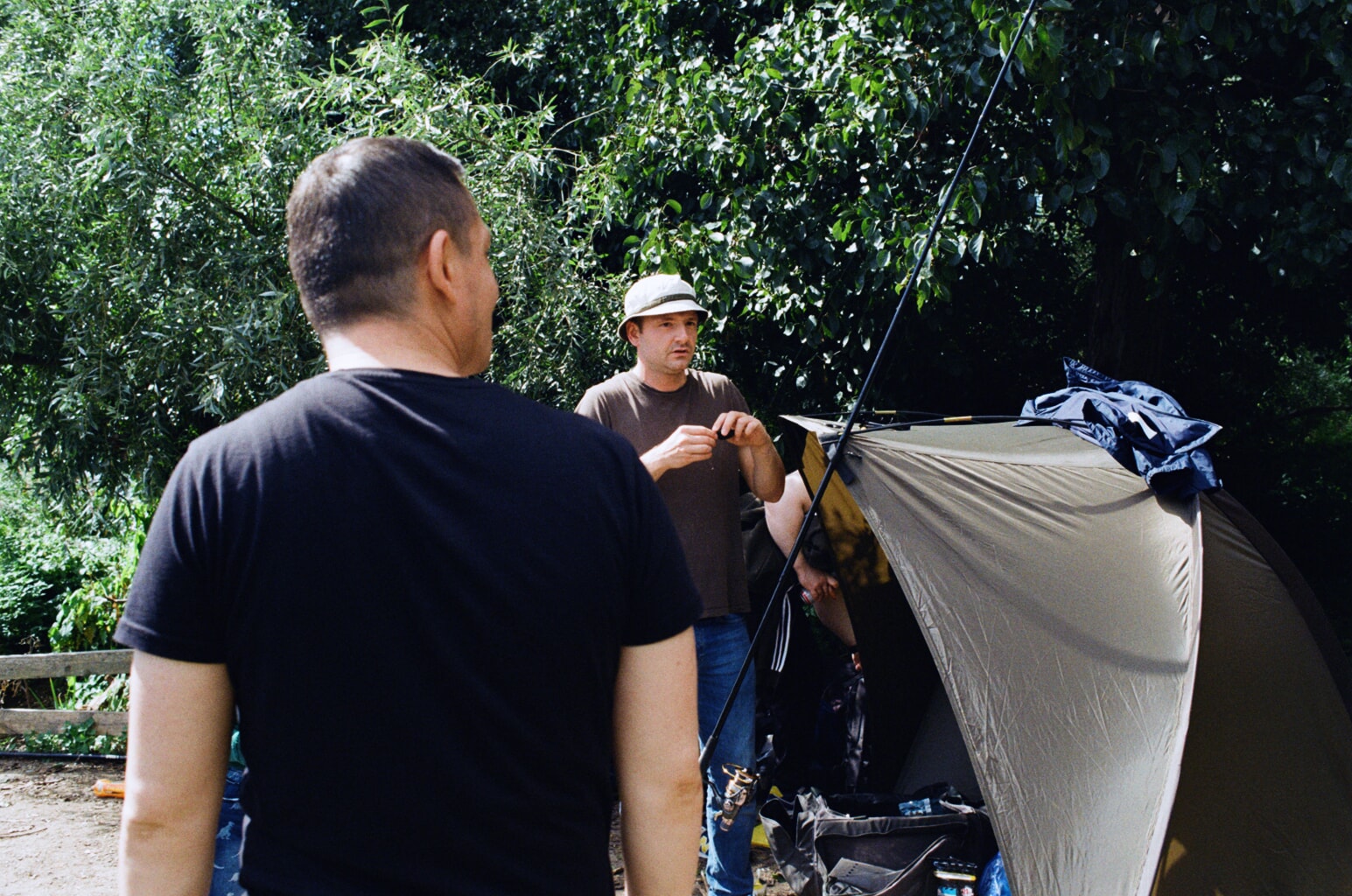 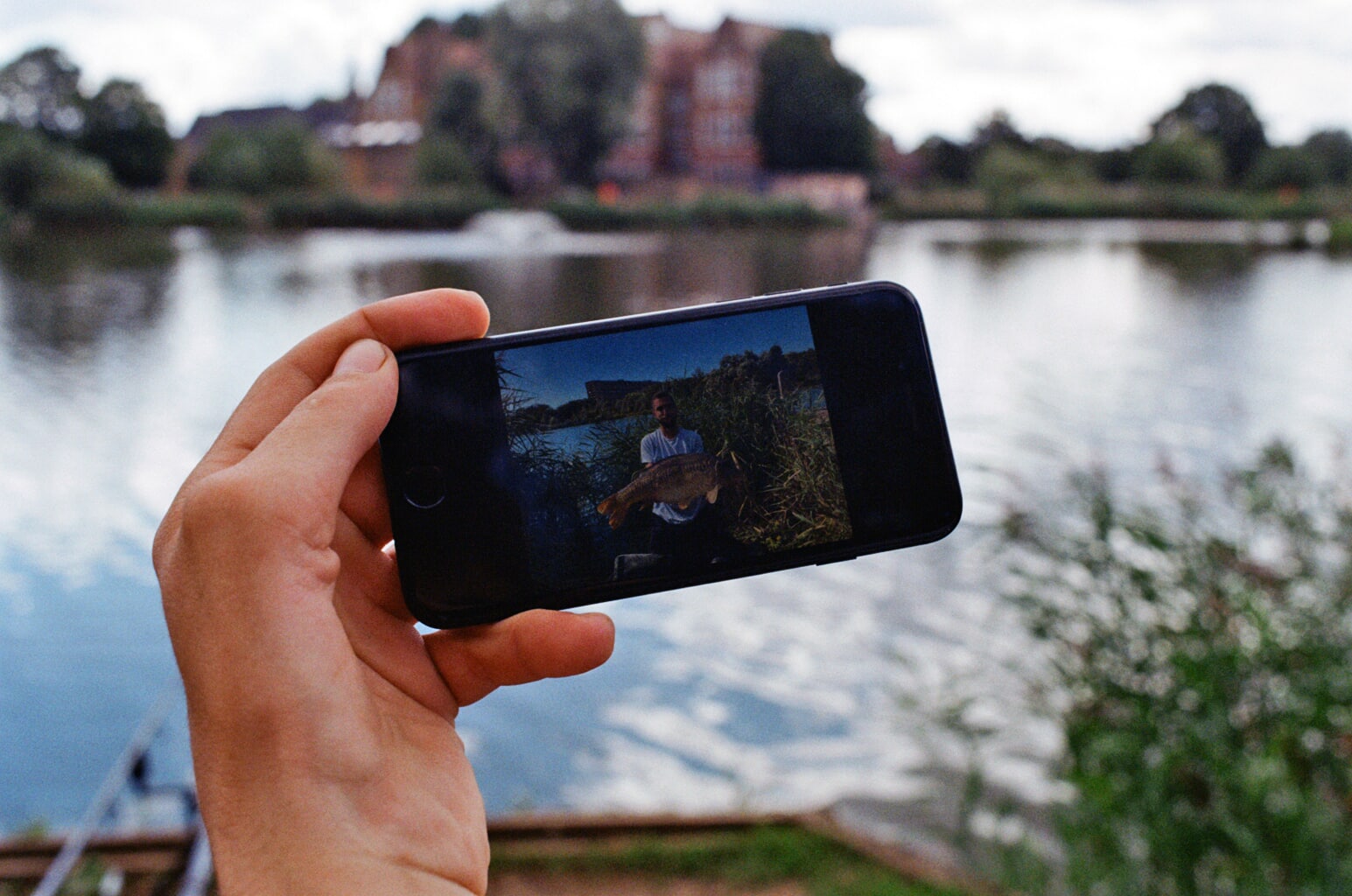 It’s around twenty minutes before Ollo (the photographer) and I are introduced to Burgess Park’s 60-pound catfish. The one that feasts of ducks. The one that’s almost impossible to catch, perhaps even to perceive. You’ve got to use different bait for catfish, you see, and this particular lake is populated by carp. “I’m not sitting here all day”, Mark is telling me: “I’m not sitting here all day and waiting for that bastard. He’s not having my day, I at least want something.”

The catfish has lore to it, but like Mark most are fixated by the much more common carp. While I truly believe the sociable element is at the forefront of their desire to angle, leaving without having caught a single thing would be a sham. You don’t want all the others in your ear.

Luke turns me onto some of the fishing social media accounts he follows. Again, young lads who wouldn’t look out of place at a day rave, each boasting followers in the thousands. Their content doesn’t exactly vary: pictures of carp lakeside, but the engagement comes in heavy supply; hundreds of likes, endless comments.

There’s a feeling of progression to it. You can complete a park, I’m told. This lake’s most rewarding carp comes in at 32-pounds, so if you catch that, you’d naturally move onto the next. Which for some is an inconvenience; like me, they live across the road.

I wouldn’t want to make any rash judgments as to why this pastime has captured a surprisingly specific set of people. However you can guess, and what I’ve seen in my albeit limited time as an admirer is an opportunity to be outside, light or dark, resisting usual fleeting temptations such as Instagram. What I see is time with your mates in an environment where there isn’t pressure to spend money, to be someone certain. What I see is a hard-earned sense of accomplishment, finally reeling in that 32-pounder after having spent hours upon hours getting nothing. Or maybe if you’re lucky, a close-to-mythical catfish.

All in all, considering the limitations we’ve all found placed upon ourselves in recent times, the whole set-up seems nice, it feels tempting. A break, something that makes sense in confusing times.

A painter asks a thief why he stole her work. ‘Because it was beautiful,’ he says. A new documentary tells the story of what happened next. 4 MINS  /  5 days ago

Adam Driver is playing a guy called Paterson. Who happens to be a bus driver. And who happens to live in Paterson. Meta at every level, Jim Jarmusch’s Paterson is poetry for the big screen. 4 MINS  /  20 hours ago
See More