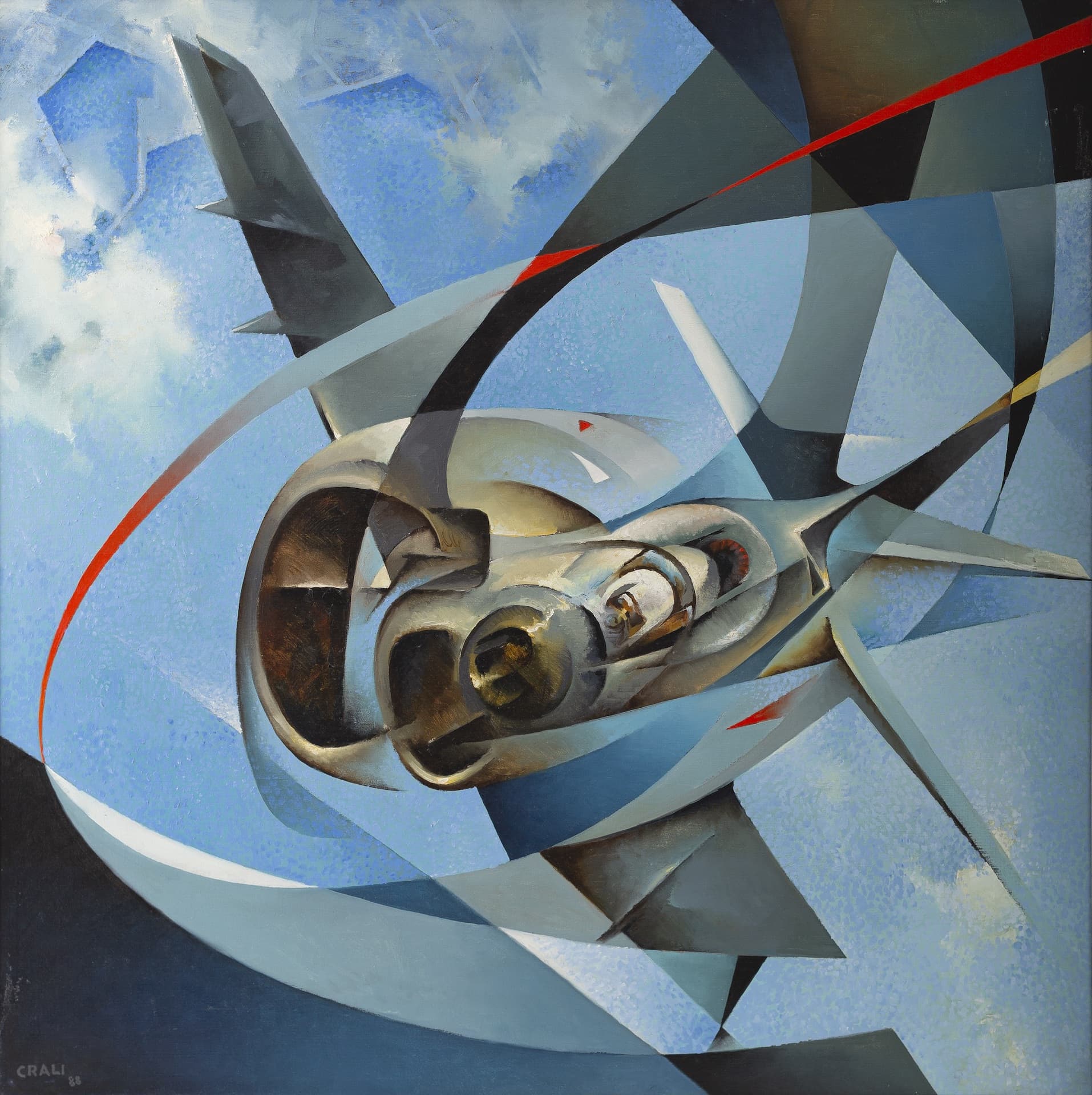 Pietro Bordino’s racing car comes hurtling around the chicane as a series of distinct curving geometric shapes in red, black, grey and white; light reflects from the car’s brilliant scarlet bodywork as it seems on the point of flying out of the canvas and at the viewer.

It’s unlikely that anyone ever published a manifesto calling for the status quo to be preserved and the world to remain forever unchanged. However, Marinetti’s Manifesto of Futurism, published in Le Figaro newspaper in 1909, meets even the most ardent rabble-rouser’s expectations. Marinetti called for the values and culture of the old world to be swept aside before the advance of the new century’s nascent technologies; creation, the theory went, came out of destruction and thus war was a good thing; the future lay in the glorious power and speed of the machine, specifically the automobile and the awe-inspiring, and only recently developed, aeroplane. (The Wright brothers’ first manned, powered, controlled flight had taken place just six years earlier, in 1903). 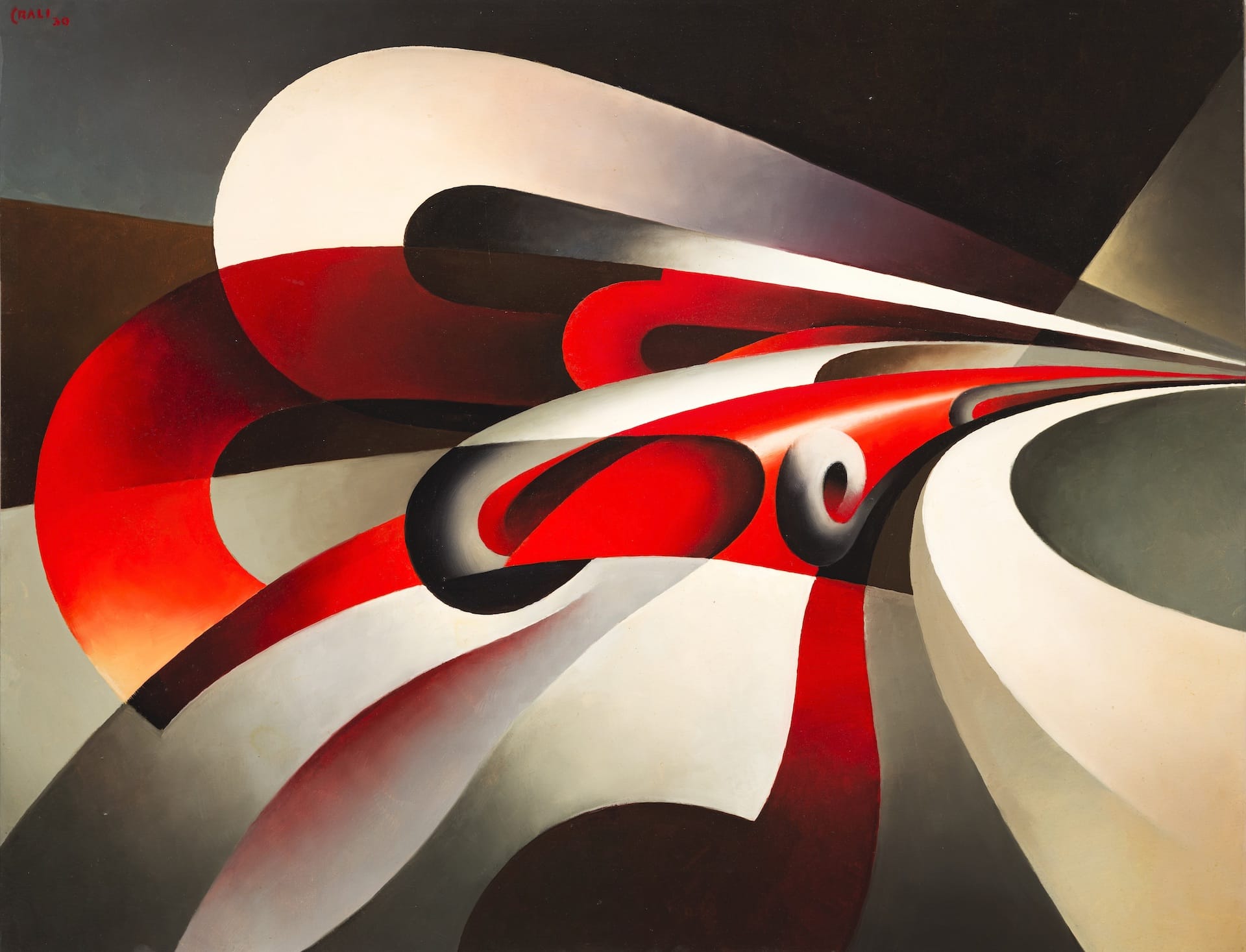 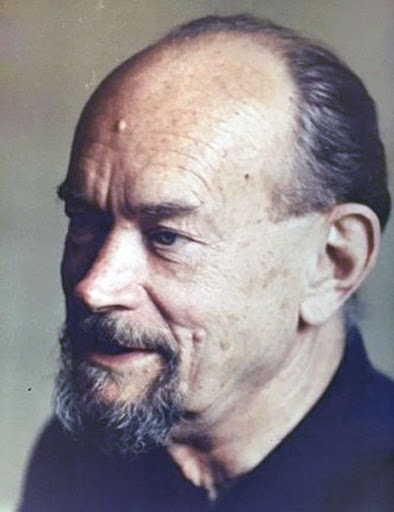 Tullio Crali (1910-2000), whose career is given a comprehensive overview in this exhibition at the Estorick Collection of Modern Italian Art, happened across the tenets of Futurism in a newspaper in 1925 when he was a boy of fifteen and immediately saw, if you will, his future in Futurism. This fascinating show encompasses the career of an artist who – unlike most of his contemporaries – retained a lifelong devotion to Futurism’s creed while rejecting the movement’s well-recorded political associations with fascism.

The exhibition notes point to Crali’s early technical struggles as a self-taught painter. The graft and application came to superlative fruition in 1930’s Le forze della curva (The Forces of the Bend), as representative an example of Futurism’s dynamic style as you could wish for. Pietro Bordino’s racing car comes hurtling around the chicane as a series of distinct curving geometric shapes in red, black, grey and white; light reflects from the car’s brilliant scarlet bodywork as it seems on the point of flying out of the canvas and at the viewer. 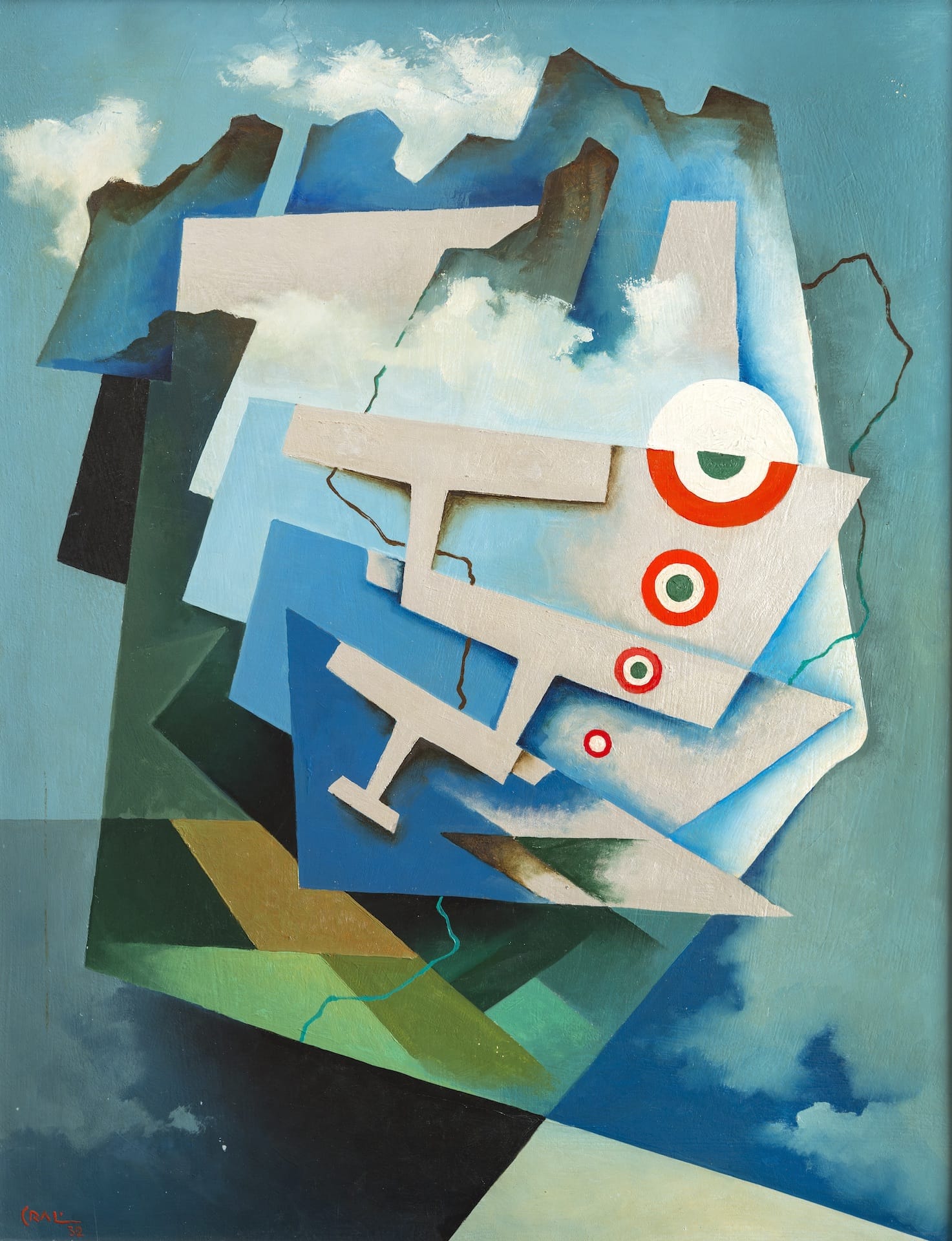 In this, and many other works throughout the exhibition, there is at times something close to superb commercial design. Examples of Crali’s celebrated ‘aeropaintings’ abound, works that exalted the wondrous new human achievement of flight. Again, the paintings are less directly representational so much as concerned with expressing the multi-sensory experience of flying, the dizzying aerial perspectives, speed and the sense of many different things happening simultaneously. In these, the stylistic consistency is maintained – the constituent parts of the aircraft may be seen but from different perspectives in a manner that hints at cubism, amidst squares of fields or the spire of a church distantly below.

Such works naturally assumed a different emphasis during the war years; the exhibition notes are at pains to stress that although Crali carried out artistic activities for the Italian war effort, he was not politically motivated, and indeed was later threatened with deportation by the Nazis for his commitment to ‘subversive’ avant-garde art. In an apparently lose-lose scenario though, when the war ended, the new, Yugoslav occupiers regarded Crali’s organised ‘Poetry Gatherings’ as acts of collaboration and the artist was briefly imprisoned.

Out of this period, which also saw the shattering death of Crali’s idol and mentor, the founder and figurehead of Futurism, Marinetti, two effects ensued. One was a lifelong aversion to politics, the other, the inevitable falling-from-favour that befell Futurism and its adherents, given the association with the vanquished fascist regime.

Crali moved to Paris and taught, all the while filling up sketchbooks with drawings and notes, an artistic record of the city. As well as some wonderful and striking paintings of geometric inspiration from this period, e.g The Dredger (1951) and Parisian Rooftops (1953) the displayed sketchbooks are themselves an artistic treasure trove of rapidly executed scenes and buildings.

The subsequent decade and beyond saw the kind of experimentation common to the 1960’s, some of it vibrant and almost mysterious, e.g the Sassintesi works, carefully arranged stones and organic matter from the Brittany coastline, as well as a return to thrillingly dynamic aeropaintings, often inspired by the Italian equivalent of the Red Arrows, the ‘Frecce Tricolori’.

Italian Futurism’s historical links with fascism doubtless led to some significant artists not receiving the attention they might otherwise have garnered. Tullio Crali is certainly one such. This vibrant and exhilarating exhibition goes some way towards redressing the balance.

‘Be daring, be different, be impractical’ – Cecil Beaton, an exhibition

An exhibition brings together the work of Cecil Beaton, charting his incredible career, in which he photographed some of the most defining figures of the twentieth century. Uncategorised 5 MINS  /  6 days ago

Burning All Illusions: Trouble in the banlieues with La Haine and Les Misérables

25 years after its original release, La Haine arrives in cinemas again alongside Les Misérables. The two films take us down and out in Paris’ banlieues; here, tension simmers under stagnant politics, and cameras are ever-trained on the brutal face of inequality. 5 MINS  /  2 hours ago

A Conversation with Andrew Litten

whynow speaks to Andrew Litten, a figurative painter of raw intensity, to talk about depicting anxiety, honesty, and the power of empathy. 2 MINS  /  3 days ago
See More