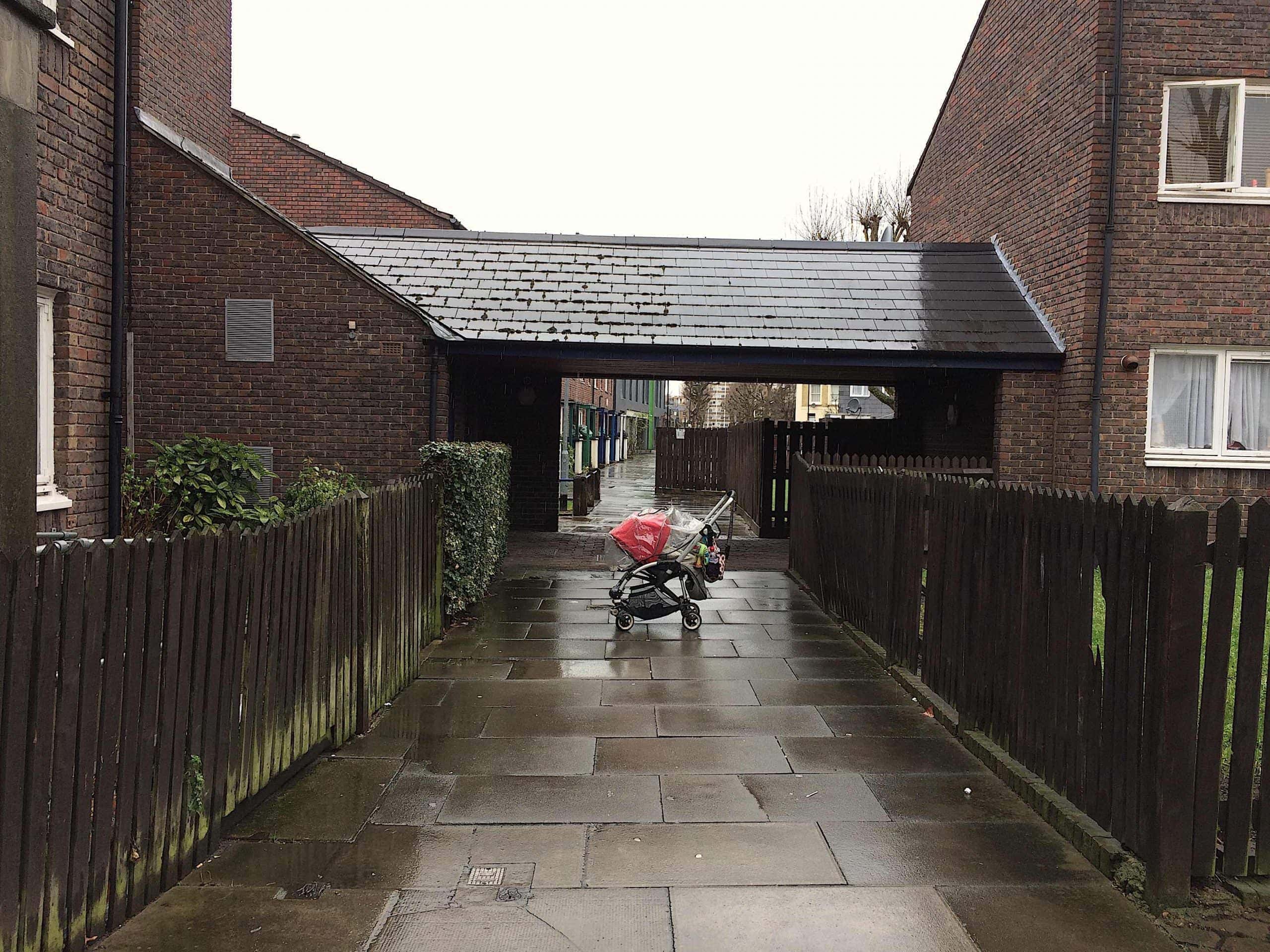 OK Blake Morris: A Wander is not a Slog / Maternity Leaves

How well do we think we know our urban landscapes? How do cities make us feel, and how does walking the city help us locate ourselves? In this piece, we delve into the art of psychogeography and explore the simple ways we can shift our perception of the everyday.

Taxi lights stream by like a sea of plankton; people chatter in high-speed Mandarin as they deftly navigate the crowded streets; a group of elderly dancers moves in synchronised steps to Korean pop blasting from a portable stereo; and an advertisement covering the entire face of a building illuminates the scene with the intensity of a spacecraft’s searchlights.

Diving underground, I seek refuge in subterranean Shanghai, and it’s here that the realisation suddenly hits that I’ve relocated to a city where I don’t know anybody and barely speak a word of the local language. I feel as if I’ve been airdropped onto the set of Lost In Translation.

The metro map – a mass of colours and lines – swirls into an intoxifying, headache-inducing vortex. So instead I return to street level and I begin to walk.

Cities, by their nature, are unknowable places. Forever moving and evolving, they’re constantly in flux even if outwardly things appear the same. One of the best ways of getting to know a place is by walking, but as walking is no longer convenient, we travel in cars, buses and trains and in turn, lose our ability to organise the city on our own terms. Locked into familiar rhythms, we retrace the same routes over and over, and the city – laden with possibility – closes itself to us.

In 1950s Paris, a group of left-wing artists called for a radical change. Deeming modern architecture both physically and ideologically restrictive, the Situationists sought a new awareness of the city. In 1955, the collective’s co-founder Guy Debord coined the term ‘psychogeography’ to describe the study of how the urban environment influences our moods and behaviours; it was thought that by tapping into these myriad experiences of the city, life itself could be transformed.

Of course, another motivator was the group’s desire to disrupt the capitalist system, which they believed was slowly destroying society. Faced with the increasing privatisation of public space, the city was becoming more inaccessible, so in revolt, the Situationists developed a series of experimental strategies to effectively unlock the city.

One of their core practices was the dérive or ‘drift’ – unplanned, often drunken walks around the city. Through wandering, they encouraged the act of getting lost, straying off the prescribed path and exploring the city free from the confines of predictability and routine. If the drifter had company, the dérive essentially became a combined art of conversation and drunkenness, both of which Debord apparently excelled at (according to his biographer, Vincent Kaufman).

Although the term was coined in 1955, the actual practice of psychogeography likely goes back much further. An early example is the author Thomas De Quincey, who in Confessions of an English Opium Eater (1821), embarked on drug-fuelled wanders in the capital’s ‘sphinx’s riddles of streets’:

“I used often on Saturday nights, after I had taken opium, to wander forth, without much regarding the direction or the distance, to all the markets and other parts of London to which the poor resort of a Saturday night… Some of these rambles led me to great distances, for an opium-eater is too happy to observe the motion of time.”

Psychogeography and its reimagining of the city also has roots in Dadaism and Surrealism – both art movements which explored techniques of unleashing the subconscious mind. Surrealism, like psychogeography, shows how by shifting our perspective just slightly, the real and the extraordinary collide, or as André Breton put it, they become ‘communicating vessels’.

The Situationists believed that by walking the city, the mind is unconsciously guided by the sensory information it encounters en route. According to Debord, the drifter is steered by unconscious markers in the city: “From a dérive point of view cities have psychogeographical contours, with constant currents, fixed points and vortexes that strongly discourage entry into or exit from certain zones.”

These key psychogeographic points were known as plaques tournantes (‘turning places’) and by charting their locations in the city, the Situationists argued they could map the ways in which the seemingly dull geography of everyday urban experience gave rise to specific emotions and behaviours.

As well as wandering, the Situationists cut up and manipulated maps and experimented with zany ideas for getting lost, such as hiking Germany’s mountainous Harz region using a London A-Z as a guide.

Back in France, they entered the catacombs illegally, navigating its subterranean tunnels and ossuaries, whose existence many Parisians were unaware of beneath their feet. In each instance, their walking practice became one of empowerment, a means of regaining autonomy over their environment and injecting a sense of play into everyday life.

While geography in the traditional sense is about the objective study of the land, psychogeography is concerned with subjectivity, the way our psyche is closely interlaced with the topography of the city. Here’s an experience nearly everyone will relate to: you’re walking along and suddenly you pass the same street corner where, years ago, something happened.

Maybe you collided with a lamppost or said goodbye to someone for the last time, or perhaps you fortuitously discovered a £50 note. Through the simple act of passing through a place, the memory instantly surfaces, whether welcome or not.

Sometimes the associations are so strong, as in the case of trauma, that the person will do everything in their power to avoid returning to the place where the event occurred, for fear of reliving their trauma.

As Rebecca Solnit writes in her book A Field Guide to Getting Lost (2005), places become enmeshed with our identity: “Perhaps it’s that you can’t go back in time, but you can return to the scenes of a love, of a crime, of happiness, and of fatal decision; the places are what remain, and are what you can possess, are what is immortal. They become the tangible landscape of memory, the places that made you and in some way you too become them.”

Though we often think of our consciousness as being entirely within us, the mind also relies on structures outside the body to help us think. Let’s, if you will, imagine a spider:

Seemingly idle, she sits in the centre of her web. Like a labyrinth, concentric lines extend outwards from her static, suspended body. Yet beneath this passive exterior, she’s tugging and loosening strands of her silk net, actively manipulating it in subtle ways. In fact, according to new research, spiders don’t just use their webs to sense with, they use them to think.

Areas where the web is taut signal where exactly she’s focusing attention – and if the web is cut or broken, she immediately recalibrates. According to researcher Hilton Japyassú, it’s as if the already-built portions of the web are reminders, or parts of external memory. Cutting the web is equivalent to performing a spider lobotomy.

The reason for this spider detour is that this idea of extended cognition might partly be translated to humans and the way we navigate our own surroundings. Whether consciously or not, we’re constantly responding and reacting to our external environments.

The cities we inhabit are scribbled with the ultraviolet ink of our memories, desires and regrets only visible to us, just as they’re scored with the familiar paths that we tread. Imagine what your own internal map of your city or neighbourhood would look like. How often do you venture off the beaten track? How often do you walk purely for the sake of walking? How deep into the city does your curiosity take you?

Though I didn’t realise it at the time, in Shanghai I was creating my own psychogeographical map of the city, using the aimless walk as a way to reorient myself. Having not yet succumbed to the smartphone life, I named my walks ‘Shanghai without Google Maps’, willing myself to get lost and discover hidden pockets of the city I knew I wouldn’t otherwise find.

By walking Shanghai, I knew which streets to avoid after dark, knew the exact spot for hot sweet potatoes on winter mornings or noodles late at night, and where, buried deep within the maze-like shikumen neighbourhood, a book market was assembling at dawn. I learnt how the streets slotted together and how single streets contained whole universes within themselves.

Even now, six years on, I can still recall those same routes I walked in my mind and feel the exhilaration that lies in not knowing what awaits you round the corner.

Featured image is ‘A Wander is Not A Slog’ – Blake Morris walking Lizzie Philps’ ‘Maternity Leaves’ an artistic walk included in Ways to Wander (2015) – a book of walking instructions written by members of the Walking Artist Network.

I saw the best scarves of my generation destroyed by neglect

Throughout the summer, largely hidden from human eyes, an epidemic has been raging whose casualties are only now becoming clear. I’m talking, of course, about London’s clothes moth plague.  4 MINS  /  6 days ago
See More