Watch Dogtooth to feel better about your lot - whynow

Struggling to fill your days? Finding yourself at a loose end as another empty evening beckons? Well, you could stand to learn a thing or two from the family at the heart of Yorgos Lanthimos’ Dogtooth.

Three adult children, two sisters and a brother, have a lifetime’s experience of keeping themselves entertained with absolutely zero input from the outside world. Sheltered by their parents in a claustrophobic hothouse of lies and infantilising intimacy, the kids pass the time with endless endurance tests; medical experiments; watching home movies of themselves; spotting planes overhead. Life beyond the house will have to wait – at least until their dogteeth fall out.

Sit down in the sea

The lore of ‘dogteeth’ (canines) is just one example of the scrambled mythology which governs their lives, and it goes something like this: one can only leave home once they’ve lost a canine tooth. The only way to leave safely is by car, but you can’t learn to drive until that same tooth has grown back; as such, it’s safe to say these guys aren’t going anywhere fast. Plenty of preparation to do in the meantime, though; Dogtooth opens with an intermittent voiceover, gentle and efficient, delivering vocabulary lessons. “Today the new words are the following: Sea. Highway. Excursion. Carbine.” Their mother’s pre-recorded voice washes over them and us too – but while you might recognise the words, just wait til you hear their definitions.

“’Sea’ is the leather chair with wooden armrests like the one in the living room. Example: don’t remain standing. Sit down in the ‘sea’ to have a chat.” Oh. Meanwhile, “’highway’ is a very strong wind”, and ‘excursion’ is “a highly resistant material used to make floors”. Panning from face to face, the camera captures the siblings listening politely and attentively. Obedient and conscientious, the atmosphere is one of familiarity rather than confusion. Almost, of reverence – as though they’re hearing a sermon, rather than a language tape. 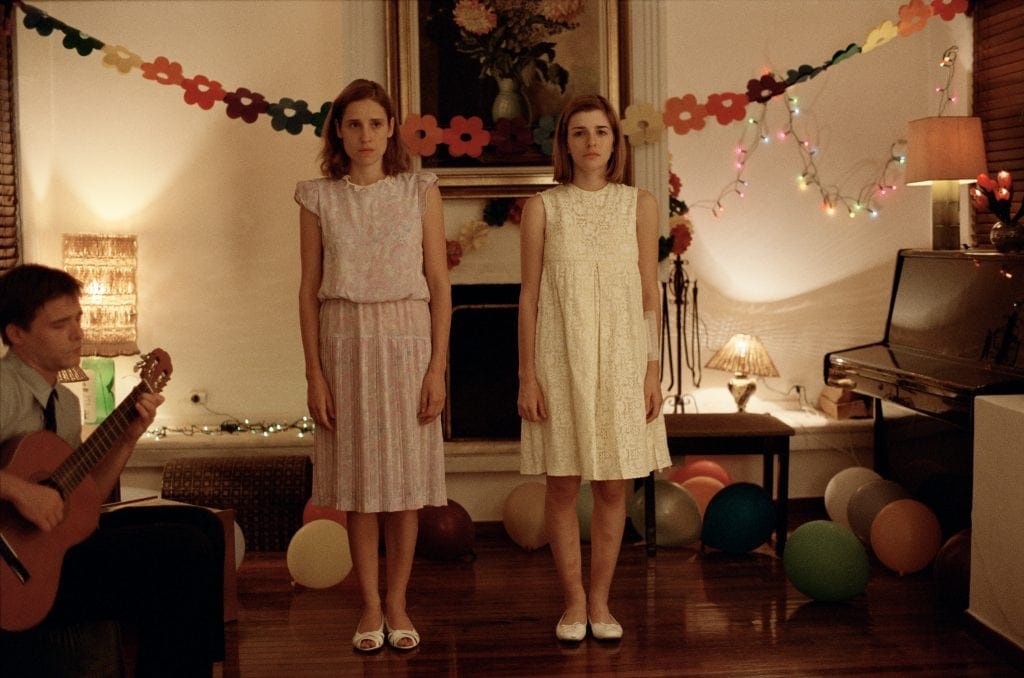 Fish in the pool

The ‘children’, unaware that they’re being manipulated, live in a world which is at once very frightening and very magical. For instance: there is no creature in the world more fearsome than a cat. For instance: fish appear in the swimming pool, and planes fall from the sky. Of course, we see their dad buy bream from the market and set them loose in the chlorinated water. We see mum chuck a model Boeing onto the lawn from the patio; but, for people who’ve only spotted planes at a great distance from their garden, the toy seems pretty true to scale. And, for adults who’ve never left the childhood home, why oughtn’t fish just appear – like butterflies or clouds seem to, along with everything else in their lives?

Whether the family’s isolation is motivated by love or a darker need to control, the nameless children’s nameless parents have kept them apart from society entirely and since birth. As such, a strange ecosystem has sprung up and twisted around the siblings. Although they seem to be in their twenties when we meet them, their behaviour is that of much younger people. Elaborate games and rituals occupy their days, with all the raw material mediated by mum-and-dad.

Of course, a version of that equation was true for everyone once. For better or for worse, we were all helpless for a while – anyone who can speak, or count, or sew, or sing, learned how from someone else. Whether you remember that person with love or hatred is beside the point; whether the input came from parents or aunties or teachers or social workers, it came from somewhere. Dogtooth, then, is the story of that input on steroids. Nurture, stomping unbidden over nature.

Rewarded with stickers when they do well and subject to corporal punishment when they don’t, the trio compete for parental approval and a prime position in the family pecking order. And, as the only member allowed to leave the house, their father looms especially large in their collective psyche. There, he is the unquestioned dispenser of rewards and punishments. Omnipotent and all-knowing, he wields his influence to provoke some very Greek Myth behaviour indeed – conversely, he performs duties in a middling role at a factory during the working day. Out there, no one special. In a universe of his design, he’s indispensable. 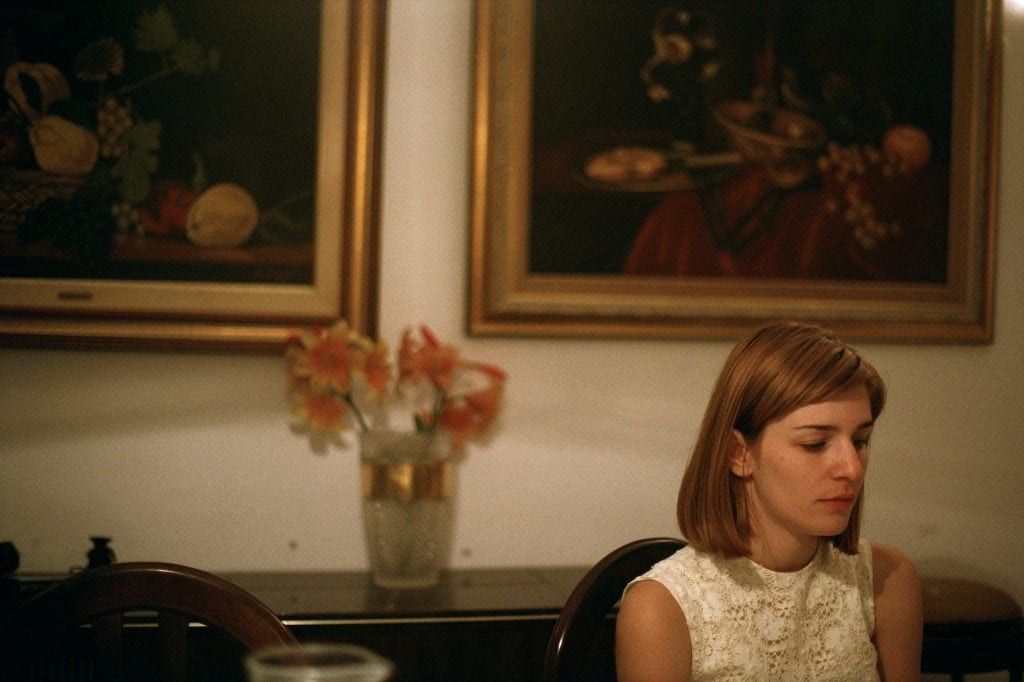 As such, and provided for by this God-parent, barter is the only currency available to the siblings. Swapping socks for pencils between themselves is one thing; when it is decided that the brother is old enough to need his sexual urges met, a whole new entity to bargain with is delivered through the otherwise intact seal of their household. Hiring a security guard from his office building (Christina, the only character in the whole film with a name) to fulfil the unenviable role, their father pierces a hole in his own cloak. No turning back now – the door is open, and all bets are off.

Dogtooth is a film about the profound violence of control, but it’s also about the danger and unpredictability of life: you create what you fear, as they say. As the delicate balance of the household is set off kilter by Christina’s arrival, everything the father feared does come true – bit by bit, and then all at once. In a prison of his own making, he’s created an environment so fragile and remote that the slightest recalibration will bring it crashing to the ground.

Unable to persuade the boy to go down on her, Christina asks his eldest sister to step in. For her part, she’s more than happy to oblige – not least because of Christina’s expert bargaining with a sparkly headband. Stakes rise and tensions build; while the sister doesn’t quite understand her own arrangement with Christina, she senses it’s transgressive in some way. “Do you know what dad will do if he finds out I lick your keyboard?” she threatens (keyboard, it seems, is family code for vulva). Boy oh boy, just you wait.

If you don’t speak Greek, you’ll have at least learnt to count to three by the film’s end. Éna, dýo, tría becomes a kind of mantra, repeated so often as a preface to some competition or other that it begins to elicit a kind of Pavlovian response in the viewer. Let’s test out my new bottle of chloroform – whoever wakes up first will be the winner, ok? Éna, dýo, tría.

Let’s see who can hold their finger under the hot tap the longest. Ready? Éna, dýo, tría. Let’s all wear blindfolds and see who can find mum the fastest. Let’s see who can bark the loudest. Let’s pass the time by literally counting it out. Éna. Dýo. Tría. While it’s uncomfortable to watch the adult siblings be heartbroken or elated by such trivial metrics, we can all cast our minds back to the playground when games like these were more important than anything. 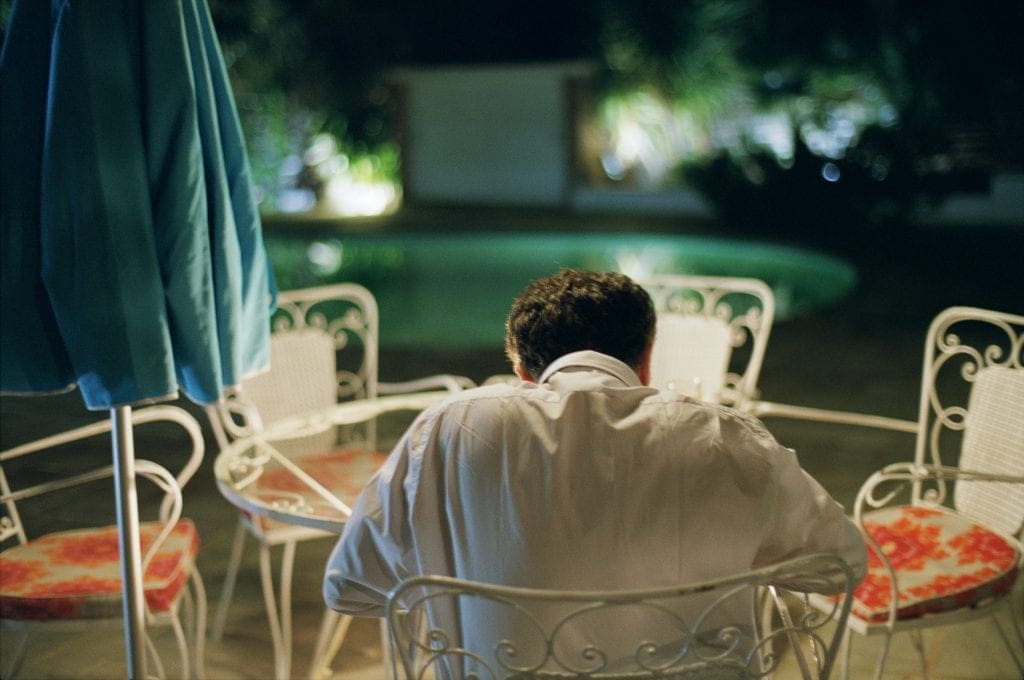 Anyone who’s been in charge of a child for more than ten minutes knows that the foolproof way of getting them to do anything is to time them, to race them, to make the boring activity into a game. Who can tie their shoelaces the fastest! I bet you can’t get into the bath before I count to ten! How peas can you fit on your spoon?

The film’s family works like society in miniature, and so does everyone’s. While you might call Dogtooth a dictatorship rather than, say, a socialist democracy, domestic power structures are just scaled down versions of the ones which keep countries running. Insular or open, authoritarian or libertarian, children age up through one hierarchy and move into a wider one, only to establish their own if they have kids in turn. For some, like Dogtooth’s eldest daughter, that time to move on can’t come fast enough. 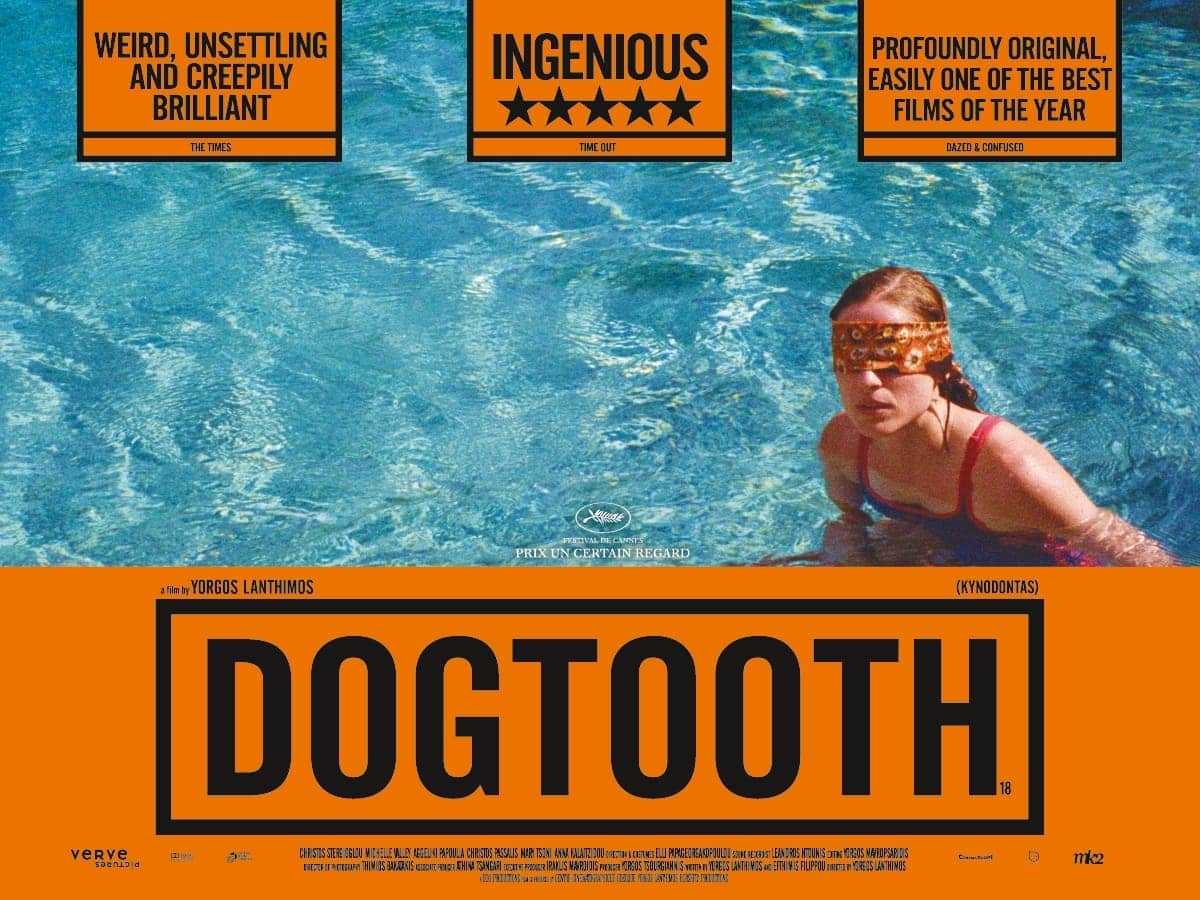 Fly me to the moon!

Dogtooth’s father claims to be protecting his offspring from bad influences, thereby imprinting them with some of the most heavy-handed influence anyone could muster. One evening, he asks the children if they’d like to hear their grandfather sing – yes, oh yes! Placing a Frank Sinatra record on the turntable, he sits and translates for the family:

Fly me to the moon! And let me play among the stars.

Let me see what spring is like, on Jupiter and Mars.

In other words, hold my hand.

(I love my brothers and sisters, because they love me too.)

In other words, darling, kiss me.

Moulding citizens – of nations or houses – happens from the moment they’re born. Call his version of Sinatra propaganda, or call it a national anthem for a nation of five; to the kids, this is the only world they’ve ever known. For us, beyond the film and in the midst of our own seclusion,  it can feel like a stretch to remember that life wasn’t always so limited.

If you needed convincing that unhealthy ways of being can sneak up unbidden, born from fear or just logic-loops, then I present Dogtooth as Exhibit A. While we’re living in our own disaster movie, the temptation to retreat  – to protect oneself, from cats or viruses as the case may be – is strong. And while it’s intermittently imperative to do so physically, for the time being at least, it’s the emotional toll of isolation which is the pandemic’s real threat. Take a deep breath, and move beyond the threshold; éna, dýo, tría.

A painter asks a thief why he stole her work. ‘Because it was beautiful,’ he says. A new documentary tells the story of what happened next. 4 MINS  /  5 days ago

The phrase ‘Solvitur Ambulando’ means: ‘it is solved by walking.’ In the second instalment of a new series about walking, we explore the ways walking can unlock new ideas and help us solve creative problems.  /  4 days ago
See More